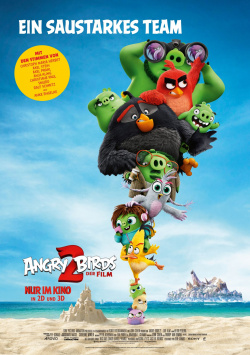 Since Red saved his bird friends from the nasty green pigs around Leonard, he has been the big hero on Bird Island. Red Bird is astonished when his nemesis, of all people, shows up one day with a peace offering. For there is a great danger emanating from a previously undiscovered third island that poses a huge threat to the home of the birds and the pigs. Reluctantly, Red, Chuck, Bomb, Mighty Eagle, and Chuck's sister Silver must team up with Leonard, his assistant Courtney, and tech nerd Garry to save their islands. But their new enemy has some truly icy surprises up his sleeve.

The movie to the handygame! When the first Angry Birds game developed by Jaako Iisalo, Markus Tuppurainen and Peter Urbanics was released for the iPhone in 2009, the Finns had no idea then what a goldmine they had stumbled upon. The very simple principle of the game - angry birds bomb pigs that have stolen their eggs - quickly became a big hit thanks to the high addiction factor. There are now several variants of the game - including Star Wars and Transformers versions of Angry Birds - which have been downloaded over 500 million times and have long been playable on all devices. Such success, of course, doesn't go unused by Hollywood for long, and so in 2016 Angry Birds - The Movie hit cinemas.

After the film managed to gross over $350 million worldwide, the battle between the flightless birds and the cheeky pigs is now entering its second round. Angry Birds 2 - The Movie is actually one of the few cases where a sequel is better than the first installment. The gags are still not really subtle, but nowhere near as flat as in the predecessor. The story is also much more original - even if it is of course still based on the very simple basic principle of the game. But some really nice ideas make for entertaining entertainment and for a few really successful laughs.

Also the German dubbing can convince. This may also be due to the good voice actors: Christoph Maria Herbst once again lends his voice to the main character Red and forms with a delightfully over-excited Axel Stein as Chuck and Axel Prahl as Bombe the popular bird friends trio. As in part 1, the Mighty Eagle speaks with the voice of Fanta4 member Smudo, Anja Kling once again slips into the role of Mathilde and Ralf Schmitz can also be heard in part 2 as the head of the pigs Leonard. New to the cast are Anke Engelke as the clever Silver and Christiane Paul as the eagle lady Zeta, who takes on the birds and the pigs.

The humour overall is very child-friendly, while the soundtrack of pop history classics is often used to bring an amused smile to parents. The turbulent action isn't really exciting either, but at least it's fast-paced enough that very young children may well be overwhelmed by it. For boys and girls from 6 years and for all who already liked part 1, this successful sequel is well worth seeing!