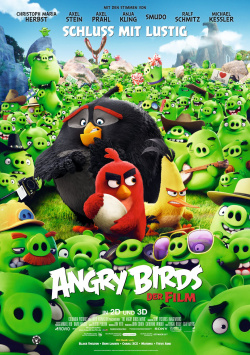 On a small island live many happy but flightless birds. However, not all of them here are truly happy. Red (voiced by Christoph Maria Herbst), for instance, is always prone to choleric fits of rage, making him an outsider on the idyllic island. When one day a ship docks off the birds' home, strange green piggies come to the island from it - supposedly with peaceful intentions. But Red just can't believe that. He's sure the pigs are up to some devious plot. Together with Chuck (Axel Stein) and Bombe (Axel Prahl) from his self-help group, he wants to find out what the uninvited visitors are up to. But no one wants to believe him - until it is too late and an unimagined danger breaks over the island.

From mobile game to movie. When the first Angry Birds game developed by Jaako Iisalo, Markus Tuppurainen and Peter Urbanics was released for the iPhone in 2009, the Finns had no idea what a goldmine they had stumbled upon. The very simple principle of the game - angry birds bomb pigs that have stolen their eggs - quickly became a big hit thanks to the high addiction factor. There are now several variants of the game - including Star Wars and Transformers versions of Angry Birds - which have been downloaded over 500 million times and have long been playable on all devices. There are even exclusive levels of the game on Facebook. Such success doesn't go unused by Hollywood for long, of course, and so now Angry Birds - The Movie is in the offing.

The story of the film is just as simple as the game itself. In addition, there is the usual message of the importance of friendship, family and loyalty and a lot of brute gags, which are used sometimes more and sometimes less accurate. Admittedly, there are some very nice ideas, but they will probably primarily appeal to older viewers. Children are unlikely to understand an allusion to Stanley Kubrick's The Shining. And also the many (English) puns hidden on various signs in the city of pigs are primarily designed for an adult audience. The rest of the film, on the other hand, is clearly aimed at kids who love simple-minded gags, the usual 3D rollercoaster effects, and the obligatory oh-is-that-funny-animals-dancing-to-a-current-pop-song number, even if all of it lacks any form of originality.

Despite this: the film is okay overall, and far better than the appallingly unfunny trailer suggested. There are some pretty good laughs and the main characters are pleasantly fleshed out. Kids in particular will take Red, Chuck and Bombe to their hearts very quickly, which is ultimately then the predominant reason why this game adaptation works quite well despite obvious weaknesses in the end. The two debutant directors Fergal Reilly and Clay Kaytis may not have hit the big time, but their Angry Birds - The Movie is at least in the same league as somewhat weaker animation hits like Kung Fu Panda 3: Not really good, but entertaining all the same. And for that you get a decent: worth seeing at the end!