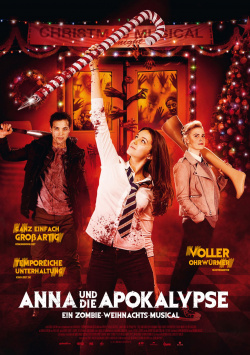 Anna and the Apocalypse

A zombie musical? Can that work? Anna and the Apocalypse leaves you with the impression in the first few minutes that the answer to that is clearly yes. The humour is a bit quirky, the songs not quite big bangers but definitely catchy and the lead actress is charismatic enough to carry the film. The fact that many of the characters are overdrawn stereotypes doesn't stand out in a negative way. On the contrary. It's just part of the comedic effect.

Unfortunately, after just under 45 minutes, the powder is almost completely shot. The best songs are sung and the best gags served. And so now come longer scenes where you wonder if director John McPhail forgot he was going to direct a musical and a horror-comedy. There's hardly any singing and the humor gives way to some very dark, dreary moments. Shaun of the Dead, for example, proved very well that something like this can work. There were some more dramatic moments here too, but they never seemed out of place due to more consistent direction.

Just the last half hour of Anna and the Apocalypse feels very indecisive and tough as hell. After such a great opening, that's a real shame. With a little more levity, literally more biting humor and a slightly less over-the-top villain, Anna and the Apocalypse would have absolutely had the makings of a cult film. As it is, the whole thing is nice entertainment, which at least leaves quite a positive overall impression due to the many successful moments. For this there is with small deductions still a: Worth seeing!

Copyright: Anna and The Apocalypse LTD

Cinema trailer for the movie "Anna and the Apocalypse (Großbritannien 2018)"
Loading the player ...