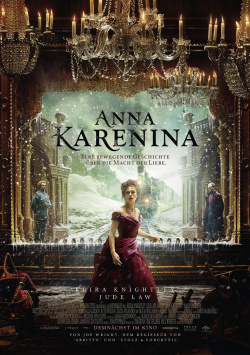 The story of Anna Karenina is not only one of the great masterpieces of world literature. Leo Tolstoy's novel has also provided the template for sometimes more, sometimes less successful film adaptations. Now Joe Wright, who has already proven himself as a master of emotional cinema with films such as Pride and Prejudice and Abbitte, has also taken on the timeless material and, with a screenplay by award-winning playwright Tom Stoppard, has delivered a very idiosyncratic interpretation that has many strengths, but also some glaring weaknesses.

At its core, the story itself has changed little: In 1874, the beautiful Anna Karenina (Keira Knightley) lives a privileged life alongside high-ranking government official Karenin (Jude Law) in St. Petersburg. In order to save the marriage of her go-getting brother Oblonsky (Matthew Macfadyen), Anna travels to Moscow, unaware that she will be putting her own marriage at risk. For when she meets handsome cavalry officer Vronsky (Aaron Taylor-Johnson) in Moscow, she is immediately attracted to the young man. Even a hasty return trip to St. Petersburg can do little to change her emotional chaos, especially since Vronsky soon follows her. A passionate affair begins, which will have dramatic consequences not only for the two lovers.

Anna Karenina is truly not an easy material to film, as the very extensive novel weaves several stories together into an extremely complex whole. However, Tom Stoppard has managed to extract the essence of the novel in his screenplay. Admittedly, numerous aspects of the book have been lost, yet this interpretation feels neither patchy nor rushed. Wright and Stoppard were particularly concerned with two aspects. On the one hand, they wanted to focus only on the character of Anna, in contrast to most film adaptations before, but also give a lot of space to the love story around Levin (Domhnall Gleeson) and Kitty (Alicia Vikander). Secondly, it was not to be shot on the usual locations in Russia, nor on the locations in England where Wright had directed his previous films. Rather, a location was to be found that would epitomize late 19th century Russian society.

The perfect location for Wright was an old theater house. It was in this that his version of the story was to be primarily set, with the stage transforming into the various settings of the story before the audience's eyes. Thus, the theatre-savvy Stoppard incorporated set builders into the plot as much as the areas in front of and behind the stage. The theatre here goes from a microcosm to a whole world of wonder and beauty, making Anna Karenina a real feast for the eyes.

However, this fascinating effect wears off a little after a certain amount of time, and then it becomes clear that despite its visual elegance and original staging, the film has one major weakness. This lies in the character drawing, which is so undercooled that it's hard to build up an emotional connection to the characters. As beautiful as the sometimes happy, sometimes dramatic love story is to look at, it simply lacks the spark that would warm the viewer's heart. With a running time of over two hours, the result is that a certain boredom can set in.

It is to Joe Wright's credit that he has dared to leave the beaten track of the great costume drama to offer his audience a refreshing, original and visually impressive film experience. He then succeeded really well in doing so. Had the film been equally successful on its emotional level, Anna Karenina would have undoubtedly had the makings of a classic. As it is, the whole thing is pure eye fodder, which can still captivate and entertain well in the first hour, but then clearly loses its power. Nevertheless - for the original approach alone there is a deserved: Worth seeing!