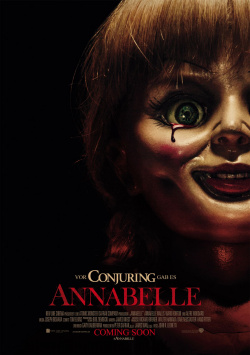 Back in 2013 horror surprise The Conjuring, demonic doll Annabelle made a memorable little appearance. After the enormous success of James Wan's creepy tale, producers have now given the terrifying doll her own movie. This, however, does not tell the story briefly seen at the beginning of The Conjuring, but a storyline detached from it that, despite the direct reference, doesn't quite feel like it fits logically into the story established by Wan's film.

Because while the Warrens were involved with Annabelle there in 1968 and have kept the doll in their Connecticut occult museum ever since, the story of Annabelle seems to take place in 1969. The origin of the doll's demonic possession is also different here than what the Warrens told their interested audiences. This spin-off centers on young couple John Form (Ward Horton) and his pregnant wife Mia (Annabelle Wallis), who are about to experience perfect family bliss. To celebrate, John gives his Mia a rare doll, the kind the avid collector has long sought. But when Satanists invade their home one night, a real horror trip begins for the couple. True, they only carry back a few bruises from the attack. But the Satanists have conjured up something terrible, which henceforth resides in the doll Annabelle. And this unimaginable evil will not rest until it has taken possession of a human soul.

The Conjuring was not necessarily a prime example of originality. James Wan had cribbed his film from quite a few genre classics. Still, it worked brilliantly and provided some of the creepiest moments of the past cinematic year. Annabelle also lacks any form of originality. But unlike The Conjuring, the puppet horror can't mask this shortcoming with a dense atmosphere and truly effective ones. Granted, there are some quite successful goosebump moments. But James Wan's cinematographer John R. Leonetti, who got to sit in the director's chair here, very rarely manages to create any real lasting tension.

The somewhat unimaginative stringing together of clichés, a lead actress who constantly seems as if she's staggering through the action half asleep, and the evil that can't quite seem to decide which version of itself to terrorize Mia in (as a doll, ghostly apparition, or demon) ensure that any semblance of genuine chills is all but nipped in the bud. If you've seen films like Rosemary's Baby, Poltergeist, or the Stephen King-penned episode of the X-Files series, you won't find much that's truly surprising here, and will even be downright bored at some moments.

However, if the mere sight of a scary doll gives you the creeps, you probably won't mind the lack of originality and will be properly creeped out by this film. However, for those who think a good scary movie consists of more than a few decent shock moments or who hope for a similar level of suspense as The Conjuring, Annabelle will definitely be a big disappointment. Therefore: only with deductions worth seeing!

Cinema trailer for the movie "Annabelle (USA 2014)"
Loading the player ...