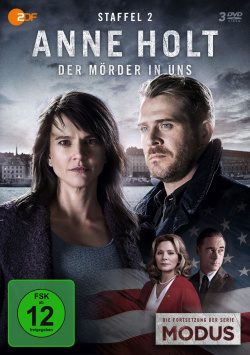 Film: Commissioner Ingvar Nyman (Henrik Norlén) and former profiler Inger Johanne Vik (Melinda Kinnaman) enjoy their private happiness. They calmly prepare themselves for the birth of their child, when a very special case demands all their attention. After US President Helen Tyler (Kim Cattrall) disappears without a trace during a state visit to Stockholm, Inger Johanne and Ingvar, together with the FBI, are to clarify the disappearance before it can reach the public. But not only that they have to deal with an overpowering enemy, for Inger Johanne the case also gets a very personal twist: She has to work together with her former mentor at the FBI, Warren Schifford (Greg Wise), which tears open old wounds. Can she push this dark chapter out of her past and work professionally to save the life of the US president? Time is running out…

"Modus - Der Körder in uns" is going on relatively new paths into the second season. It's immediately strikingly positive that the characters have been consistently developed further. Ingvar and Inger Johanne live together and look forward to a happy future as expectant parents. But, of course, that's not allowed in a crime series like this. Therefore, the makers bring a dark shadow from Inger Johannes to Stockholm and open the series even more to the international market. With "Sex and the City"-star Kim Catrall and her Hollywood colleague Billy Campbell ("The Killing") as well as the Brit Greg Wise ("The Crown") the second season has grown quite prominent.

The only question is whether this has improved the series? That can neither be confirmed nor denied. On the one hand, this squadron loses a little of its atmosphere, which is commonly referred to as "typically Nordic", due to the obvious strabismus across the large pond. On the other hand, the emergence of Warren Schifford is a particularly interesting development in the relationship between the main characters. The story itself isn't quite as gripping as the first episodes. But the whole thing still remains exciting.

You have to give the makers credit for trying not just to continue where the first season left off, but to further develop the characters and tell a whole new story. This works really well in places, in other moments you miss the intensity of the earlier episodes. All in all, however, the quite thrilling story and the good actors can make up for the small weaknesses. And that's why in the end there's also one: Worth seeing!

Picture + sound: As with season 1, the technical implementation of the series is on a good to very good TV level. The image is absolutely clean and the overall sharpness is absolutely satisfactory, especially for brighter outdoor shots. The color scheme is very atmospheric and even in the darker scenes there are hardly any qualitative point deductions. The Dolby Digital 5.1 mix sound allows the dialogues as well as the atmospheric soundtrack to come into their own. Not really spectacular, but absolutely appropriate for a crime series. Good.

Extras: On the third disc there are about 35 minutes of promo interviews with the actors. Not much, but sometimes quite informative.

Fazit: "Anne Holt - The Murderer in Us" is going new ways in season 2. The well-known characters are consistently developed further and the story even adds a scoop with an international conspiracy. It doesn't always work, but it is always exciting until the last minute. If you like season one, you'll be well served here, too. The DVD presents the individual episodes in good picture and sound quality. As a bonus there are some interviews to watch. The bottom line is clear: Recommended!