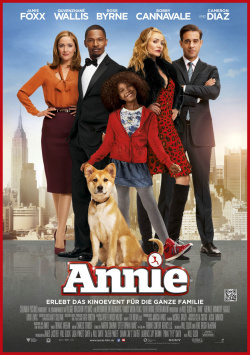 From comic strip to musical to motion picture - The success story of the little orphan girl Annie has now lasted over 90 years. But the story didn't become truly popular until the 1977 Broadway musical with songs by composer Charles Strouse and lyricist Martin Charnin. Songs like It's a Hard Knock Life or Tomorrow became real classics even beyond the musical stage, and almost every child in the USA knows them to this day. As early as 1982, director John Huston attempted a film adaptation of the successful material, but it flopped at the box office. A 1999 TV movie also failed to match the huge success of the stage version. That didn't stop the production team of Will Smith and Jay Z, who topped the charts in the late 90s with a sample of It's a Hard Knock Life, from directing another film version of Annie. Unfortunately, though, the old adage of all good things come in threes does not prove true.

The story centers on little orphan girl Annie (Quvenzhan&eacute; Wallis), who lives with a few other girls at the home of mean foster mother Miss Hannigan (Cameron Diaz). Although life hasn't really been kind to Annie, she won't give up on the dream of a better future. And there might actually be one for the girl when one day she is saved from being run over by a car by New York mayoral candidate Will Stacks (Jamie Foxx) in a media-savvy way. After this brief encounter has an extremely positive effect on the voter polls, sly campaign manager Guy (Bobby Cannavale) and Stacks` advisor Grace (Rose Byrne) decide that the not exactly philanthropic millionaire should take little Annie in to help win over the sympathy of the voters. Only reluctantly does Stacks agree to the plan, unaware that his new roommate will change his life forever with her confident manner and unwaveringly positive disposition.

No question, the story of Annie is, at its core, a really nice urban fairy tale. And some of the songs - at least in the original English version - definitely have earworm qualities. Some great and very atmospheric shots of New York also provide an appealing atmosphere. Still, the adaptation of the Broadway success staged by director Will Gluck (Easy to Have) doesn't leave a particularly positive impression, to say the least. This is due to several factors. For one, some of the actors deliver almost embarrassingly over-the-top acting, most notably Cameron Diaz as the evil foster mother and Bobby Cannavale as the walking cliché of a sleazy political consultant. But even the extremely precocious Quvenzhan&eacute; Wallis doesn't make the film a pleasure to watch. Why the girl was also rewarded with a Golden Globe nomination for this remains a mystery until the drippingly cheesy ending. Finally, Jamie Foxx doesn't even try hard to deliver a recognizable acting performance, for which he should really be stripped of his Oscar.

Both these actors and director Will Gluck have proven more than once in the past that they have talent - in some cases, a lot of it. However, there is precious little of it in this musical parade of foreign chambers. Also to blame is the extremely weak script, which seems to be a collection of clichés, flat gags and too thickly applied kitsch moments. Sure, the movie is primarily aimed at a young audience and there might not be a need for dramaturgical depth and top acting performances. But if the final product is a soulless commercial product with a half-life of 5 minutes that is far too long with two hours, then such a harsh criticism must also be allowed.

In principle, directing a contemporary version of Annie was not a bad idea. And some of the songs - as long as they're not in the dubbed version - still work very well today. But a good idea and a few catchy songs just don't make a good movie. And so the movie musical is the first official flop in our cinemas. Therefore, with the best will in the world, there is only for hardcore musical fans a scarce: Very conditionally worth seeing