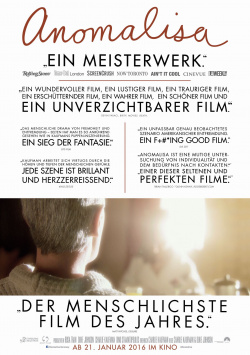 If you've ever seen a film Charlie Kaufman was involved in, you know that this artist has quite a quirky mind. Whether it's his scripts for Being John Malkovich, Adaptation and Forget My Not or his directorial debut Synecdoche, New York, wherever it says Charlie Kaufman on it, there's always something non-conformist, weird and imaginative in it. This is also true of the stop-motion animated film Anomalisa, even though dramaturgically it can almost be described as straightforward. For the story is relatively simple: Michael, a motivational trainer and best-selling author bored with the monotony of his life, travels the country, meeting the same faces over and over again, listening to the same problems, sleeping in the same hotel rooms. But then, while traveling, he meets Lisa, a call center employee. Her voice alone enchants him, standing out from the mass of monotonous voices. In Lisa, the family man seems to have found what he has so painfully missed in recent years: something special, exciting and simply different. Michael is convinced: Lisa is the one person with whom he can make a fresh start and finally break out of his depressing boredom.

Anomalisa is a film that lingers and, in a way, fascinates. So, of course, it's easy to be tempted to call it an instant masterpiece. There's no question that the truly unique visuals alone, as well as the way Kaufman deals with various very human issues here beneath the surface, are true cinematic art. But does that alone make the film a masterpiece? From a purely technical standpoint, that's certainly true. But if you look at the whole thing not only as high cinematic art, but simply as a profound entertainment film, things look a bit different. Because besides some humorous or simply beautiful moments, there are also quite a few very tough, long-winded scenes that seem a bit like unnecessary filler.

Seemingly, Kaufman wants the viewer to live through the very monotony that makes Michael so unhappy. But that makes the production extremely unwieldy in places, especially since you realize relatively quickly what the director is getting at. As a short film of just under 30 minutes, Anomalisa would certainly have been great. But for 90 minutes, the story is just too thin. The many long moments of everyday boredom and dreariness that Michael - and the viewer along with him - struggles through make the film not only extremely exhausting, but also highly depressing by the end. There are moments that are so wonderfully bizarre or full of enigmatic poetry that you are compensated in a way. Still, in the end, you're left with the impression that a little less pressure on the audience's mind would have done the overall impression good.

There's no question that Anomalisa is an exceptional film with an atmosphere all its own that's hard to escape. But it's also a difficult work to watch, putting its artistic ambitions above any form of entertainment value. The film wants to be different from the mainstream by hook or by crook, which it manages to do. But the effect wears off in the long run and then it's not enough to just be weird and unconventional. If you just want to see very special cinema art, Kaufman's animated film will definitely fascinate you. But if you can't see anything artistic with long takes in which nothing really happens, you'll be extremely bored after twenty minutes at the latest. Then even the most memorable puppet sex scene since Team America can't make up much ground. Therefore: For experiment-joyful Arthaus lovers a must, for all others rather with caution to enjoy and therefore also only with restrictions worth seeing!

Cinema trailer for the movie "Anomalisa (USA 2015)"
Loading the player ...