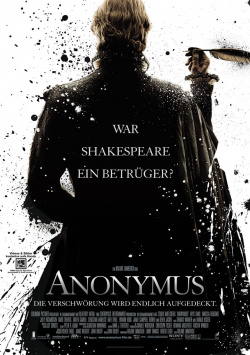 From Roland Emmerich you are actually used to movies in which it really crashes and in which aliens or forces of nature try to destroy the earth. But now the 55 year old Swabian strikes a completely new note with Anonymus. In this historical drama, made on a very small budget by Emmerich's standards, the director investigates the question of whether William Shakespeare was actually the author of his plays.

The film is based on the thesis put forward by Kurt Kreiler in his book The Man Who Invented Shakespeare: according to Kreiler, it was not Shakespeare, played in the film by Rafe Spall (Two in a Day), from whose brilliant mind masterpieces such as Romeo and Juliet or Henry V sprang. It was the nobleman Edward de Vere (Rhys Ifans), who had revealed an extreme love for the theater from an early age and was even able to seduce the young Elizabeth I (Joely Richardson) with his words. But since it was not proper for nobility to pursue menial tasks such as playwriting, Edward had to remain anonymous. Instead, he hired actor William Shakespeare to pose as the author of de Vere's plays from then on. But when Sir William Cecil (David Thewlis), advisor to the Queen, becomes concerned that his intimate enemy Edward might use his talent and Shakespeare's ever-increasing popularity for political purposes, which would also affect the succession to the throne, he launches an intrigue of almost Shakespearian proportions.

Anonymus is really only a true Emmerich film in visual terms. The mix of large sets and elaborate computer animation, coupled with the opulent set make the film a real feast for the eyes. The cast, an all-British ensemble, is also consistently convincing. While Rhys Ifans (Mr. Nice) is surprisingly restrained, Rafe Spall is particularly appealing as a somewhat different Shakespeare. Here he is not the great poet, the brilliant playwright, but a talentless good-for-nothing, a lecher, blackmailer and self-absorbed fool. And that's who Spall gives so gleefully that it's a real pleasure to hate this Shakespeare from the bottom of one's heart.

As for the realization of the story, some viewers might easily feel overwhelmed here. While the film begins in the present day, after a brief introduction it jumps to 16th century England, only to jump back a few years into the past a short time later. From then on, the action takes place on two time levels, with the visual similarity of some of the characters not necessarily helping the audience to really follow along. Emmerich is aware, however, that the first half in particular is quite confusing. But, as he says himself, a thriller - and Anonymus can undoubtedly be called such in some respects - is allowed to be confusing as long as all questions are clarified at the end. But whether all the viewers who are confused from the beginning will actually stick with it until the end and not simply switch off in frustration at some point may be doubted.

And that's a real pity. Because the story, no matter if you believe it in rudiments, is absolutely engaging and exciting. The intrigue that Sir William Cecil spins, the blackmail attempts made by a greedy William Shakespeare, the secret love of a noble poet and the Queen, all have tremendous entertainment potential. And when the true origins and connections of some of the characters to each other are revealed, the whole thing takes on proportions that even a Shakespeare couldn't have dreamed up more tragically.

First and foremost, Anonymous wants to be an entertainment film. The provocative subject matter really only serves to pique the audience's interest in the work. After all, the question of whether or not Shakespeare wrote his plays himself is truly not a new one. Countless books and theories deal with the question, sometimes comprehensible, sometimes completely absurd ideas are expressed again and again as to who actually wielded the pen. Sometimes it was a nobleman, sometimes another author, sometimes it was several different writers. We will probably never know the only true answer. And also the film primarily only uses speculations. But Emmerich never claimed to tell the real truth anyway. His goal was to show in the most entertaining way possible that there are some unanswered questions and based on that to tell a very own alternative of the story. And even if the beginning is a bit confusing and the film as a whole doesn't quite manage to live up to its potential, Roland Emmerich has once again fulfilled his entertainment brief very well with this film, which is a bit different for him. Worth seeing!

Read also the great interview with Roland Emmerich about Anonymus

Cinema trailer for the movie "Anonymous (USA/Deutschland 2011)"
Loading the player ...