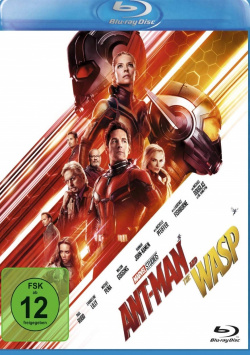 Ant-Man and the Wasp - Blu-ray

Film: After the events in Berlin (from "The First Avenger: Civil War") Scott Lang (Paul Rudd) alias Ant-Man is under house arrest. Dr. Hank Prym (Michael Douglas) and his daughter Hope (Evangeline Lilly) broke off contact with Scott after he took the Ant-Man suit without telling them what he would use it for in Berlin... He failed as a friend, as a superhero, but also as a role model for his daughter. But then it is Prym and Hope of all people who free Scott from his house arrest. They are convinced that Hope's mother Janet (Michelle Pfeiffer) is still alive on the quantum level. And Scott's the only one who was there and came back alive. He's supposed to be helping bring Janet back. But then a mysterious opponent appears, who has also set his sights on the technology with which Prym wants to make up for the mistakes of his past…

After the universe-wide battle against Thanos in "Infinity War" and the dramatic events of the last act, "Ant-Man and the Wasp" with its humor, its lightness and the comparatively "small" story is a refreshing breather before what MARVEL fans will expect next. Admittedly, strictly speaking the movie is only more of what Part 1 did so well. There are already some nice new ideas, but the scriptwriters really didn't let off steam creatively. But that's never really disturbing as the entertainment value is always on a very high level despite some repetitions and small lengths.

This is partly due to the sympathetic characters and their actors. Paul Rudd  is a charming anti-hero who cuts a fine figure with or without a superhero costume. Evangeline Lilly plays him as a really cool Wasp on the wall, especially during the action scenes. And Michael Peña quickly advances to the secret star of the movie as in the first part. Some really well done gags, some well choreographed action sequences that don't degenerate into big CGI material battles, as well as some nice running gags make the smallest of all superheroes big again (this time even in the truest sense of the word).

Alongside, this sequel is also a film about fathers and daughters. There is, of course, Scott, who wants to be a role model and a good father for his little daughter. He knows that that's exactly what he's risking as soon as he acts as Ant-Man again - but he's also aware of what happens if he doesn't. An interesting dilemma, but one that is dealt with too superficially. The relationship between Hank Prym and his daughter Hope, which has been determined by Hank's feelings of guilt for many years, is already better implemented. He feels that he is responsible for Hope growing up without a mother and he is willing to do anything to make up for it. And there's a third quasi-father-daughter story, which we won't go into further here, because it would inevitably bring some small spoilers with it. In short: The father-daughter motive is very dominant in this movie and gives it a well-done emotional level, which the first part lacked a bit.

"Ant-Man and the Wasp" isn't a big hit, but as casual comic fun it offers enough good entertainment to justify buying the Blu-ray (or DVD). As usual with MARVEL, two additional scenes are hidden in the credits. The first one is absolutely worth seeing - why, of course, is not revealed here. The second, which can be seen at the very end of the credits, is completely unnecessary. It's not worth fast-forwarding either. All in all, one thing is quite clear here: Absolutely worth seeing!

picture + sound: The film lives from its effects and the great sound design. Fortunately, both are also shown to advantage in home cinema. The picture is absolutely clean, has an atmospheric colouring and a high image sharpness. The German DTS-HD Master Audio Mix not only brings out the dialogues, but also the many small and large sound effects perfectly. The English Dolby Atmos mix is a little bit more powerful and lively. Very good.

Extras: The bonus offer is quantitatively rather disappointing. Qualitatively, on the other hand, the offer is okay. We start with a really informative audio commentary by Peyton Reed, which offers an interesting insight into the making of the film. German subtitles can optionally be added to the comment. The video extras include 4 short Making of Features (ca. 22:30 min.) about the characters and their actors, as well as about the effects and the production design. There are also two additional scenes (approx. 1:38 min.) with optional audio commentary, as well as gags and outtakes (approx. 3:47 min.). Among them are also numerous alternative versions of the cameo appearance of the recently deceased Stan Lee.

Fazit: "Ant-Man and the Wasp" is a successful sequel, which doesn't quite reach the quality of the first part, but nevertheless offers very good entertainment with great effects and well-done actors. The Blu-ray is technically at a very good level, the bonus material was very meager with a runtime of less than 30 minutes. All in all quite clear: Absolutely recommendable!