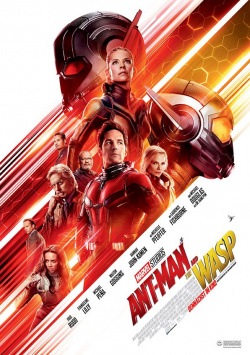 Ant-Man and the Wasp

After the events in Berlin (from The First Avenger: Civil War), Scott Lang (Paul Rudd) aka Ant-Man is under house arrest. Dr. Hank Prym (Michael Douglas) and his daughter Hope (Evangeline Lilly) have cut off contact with Scott after he took the Ant-Man suit for simply without telling either of them what he will use it for in Berlin. He has failed across the board both as a friend, as a superhero, but also as a role model for his daughter. But then it is Prym and Hope, of all people, who free Scott from his house arrest. They're convinced that Hope's mother Janet (Michelle Pfeiffer) is still alive in the quantum plane. And Scott is the only one who has been there and returned alive. He's supposed to help bring Janet back. But then a mysterious adversary shows up who is also after the technology Prym is using to right the wrongs of his past.

After the universe-spanning battle against Thanos in Infinity War and the dramatic events of the last act, Ant-Man and the Wasp's humor, lightheartedness, and comparatively small storyline make it a refreshing breather before what MARVEL fans can expect next. Granted, the film is strictly just more of what made Part 1 so successful. There are a few nice new ideas, but the screenwriters really didn't go all out creatively here. But this is never really disturbing, because the entertainment value is always on a very high level, despite some repetitions and small lengths.

This is on the one hand thanks to the likeable characters and their actors. Paul Rudd cuts a fine figure as the charming anti-hero both with and without the superhero costume. Evangeline Lilly, however, easily outplays him as the really cool Wasp, especially in the action scenes. And Michael Pe&ntilde;a again as in the first part quickly advances to the secret star of the film. Some really successful gags, a few well-choreographed action sequences that do not degenerate into quite large CGI material battles, as well as a few nice running gags make the smallest of all superheroes also in the second screen appearance again big (this time even in the truest sense of the word).

Besides that, this sequel is also a movie about fathers and daughters. There's Scott, of course, who wants to be a role model and a good father to his young daughter. He knows he's putting that very thing at risk once he goes back to acting as Ant-Man - but he's also aware of what happens if he doesn't. It's an interesting dilemma, but one that's handled a bit too superficially. Better realized is the relationship between Hank Prym and his daughter Hope, which has been defined by Hank's feelings of guilt for many years. He feels he's responsible for Hope growing up without a mother, and he's willing to do anything to make it up to her. And there's a third quasi-father-daughter story, though we won't go into it here, as that would inevitably involve a few minor spoilers. In short, the father-daughter motif is very dominant in this film and gives it a successful emotional layer that the first part lacked a bit.

Ant-Man and the Wasp isn't quite a big hit, but it provides enough good entertainment as casual comic book fun to justify buying a movie ticket. Hidden in the credits - as usual with MARVEL - are again two additional scenes. The first is absolutely worth seeing - why, of course, is not revealed here. The second, which can be seen at the very end of the credits, is completely unnecessary. So if you urgently need to go to the toilet, you can safely leave the cinema after the first scene. All in all, this is clearly a: Absolutely worth seeing!