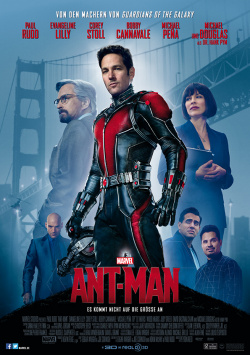 Another superhero movie? And then also an almost unknown hero, at least in this country, whose superpower is to shrink himself to the size of an ant? That sounds pretty silly and not exactly cool. Also not very positive is the fact that director Edgar Wright (Shaun of the Dead), who worked for years on his passion project, was replaced by Peyton Reed due to creative differences. Surely this can only be a total bust? Right? Far from it. Ant-Man is extremely entertaining, features brilliant action, and is undoubtedly the funniest MARVEL movie since Guardians of the Galaxy.

The story centers on computer genius and small-time crook Scott Lang (Paul Rudd), who would do just about anything to be back with his young daughter Cassie (Abby Ryder Fortson). But in order to prove to his ex-wife Maggie (Judy Greer) that he means business, he needs a place to live, money and a job. And that's not so easy when you just got out of jail. And so Scott has no choice but to get involved in another crooked affair with Luis (Michael Peña) and his gang. But the supposedly foolproof burglary at the home of scientist Dr. Hank Pym (Michael Douglas) catapults the con man into an adventure of unimagined dimensions. For Pym has chosen Scott to help him stop his one-time protégé Darren Cross (Corey Stoll) from putting Pym's groundbreaking inventions into the wrong hands. To do so, he must not only use his very special skills as a thief, but also slip into a unique suit that transforms him into a very special superhero: Ant-Man!

Ant-Man is exactly what you'd expect from a summer blockbuster. The film offers humor, action, a smattering of suspense, and top-notch special effects. But besides that, the latest adventure from MARVEL also has many other successful aspects to offer. Especially the main characters Scott Lang and Hank Pym are very well developed. Scott is actually the typical anti-hero who fulfills all the usual clichés. Nevertheless, the coherent mixture of a good script and sympathetic actors succeeded in giving this archetypal character very own traits. It's a similar story with Hank Pym. The character of the grumpy, somehow egocentric scientist has been seen in countless films in all imaginable variations. Nevertheless, Michael Douglas succeeds in giving this comic hero, who is almost completely unknown in this country, his very own touch. The good elaboration of these characters absolutely pays off, especially in their interplay, which drives up the entertainment value of the film again and again.

But Michael Peña also manages to do this in two wonderful scenes, which are guaranteed to still be from Edgar Wright's screenplay version. Greatly acted, wonderfully directed and very wittily written, these unusual flashbacks are undoubtedly among the humorous highlights of a film that has an unexpectedly high gag density without ever getting too silly. Rather, the humor combined with the great action underscores the extreme coolness of this very special superhero. The way his debut is tied into the already established MARVEL universe through allusions and minor guest appearances is also very well done. And yes, this film is again worth staying in the theater until the credits roll. In addition to a scene in the middle of the credits, there is also a small preview at the end of the next adventure of a very patriotic Avengers, in which Ant-Man will also play an important role.

Admittedly, the story itself is very conventional as a so-called origin story. But again, the actors, script and staging manage to effectively counteract any form of oversaturation of the superhero genre. Ant-Man is perfect entertainment cinema, offering moviegoers fun and fodder for the eye first and foremost for their money. And it's finally another movie where the 3D effect not only makes sense, but actually intensifies the enjoyment. If you like Iron-Man or Guardians of the Galaxy, you should put all possible reservations aside and definitely give this movie a chance. Because even small superheroes can offer quite big pleasure! Absolutely worth seeing