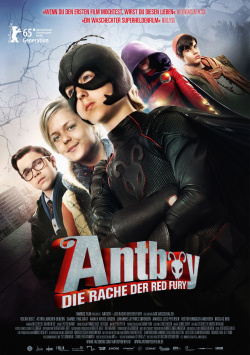 Antboy - The Revenge of the Red Fury

This is really unfair: There is Pelle (Oscar Dietz) by the bite of a mutated ant to the superhero Antboy and is celebrated everywhere and nevertheless he must struggle with the completely normal concerns of a 13-year-old. For his beloved Ida (Amalie Kruse Jensen) suddenly only has eyes for a new classmate, while Pelle is bullied at every opportunity by the nasty terror twins even as Antboy. And then the mysterious Red Fury (Astrid Juncher-Benzon) shows up, seemingly with a score to settle with Antboy. How can anyone concentrate on school?

With the film Antboy, based on the popular books by Danish children's and young adult author Kenneth Bøgh Andersen, Ask Hasselbach has achieved real respect success, and not only in his homeland. The film was sold in 35 countries and won the Danish Film Award for Best Children's Film. Following this success, Hasselbach now presents Antboy - Revenge of the Red Fury, the second part of his planned trilogy about the young superhero. Inspired by youth movie classics of the 80s like the Goonies or Stand by me, Hasselbach wanted to create an adventure film that doesn't pander to its young target audience, but that really understands their desires, fears and dreams.

He succeeded very well over long stretches. The humor is harmless and very child-friendly, and the problems Pelle (or even Maria, aka Red Fury) face are certainly something many viewers 13 and under can relate to. The feeling of being an outsider, invisible to the popular kids at school, or even the first big love and the accompanying first jealousy are presented sensitively, but never in a didactic way. This allows children to identify perfectly with the protagonists, which of course then makes the fantastic aspect of the story all the more exciting and thrilling.

At times the humour is a little too silly and lacks the light-hearted charm of the first part. But overall, Antboy - Revenge of the Red Fury is a really well-done sequel and an all-around compelling adventure film for kids ages 7-13. And there are enough nice gags that you can definitely have fun with even as an adult companion. So if you liked the first film and want to know how Antboy stands up to jealousy, terror twins and angry girls, you shouldn't miss this amusing and exciting children's adventure. Worth Seeing

Cinema trailer for the movie "Antboy - The Revenge of the Red Fury (Dänemark 2014)"
Loading the player ...