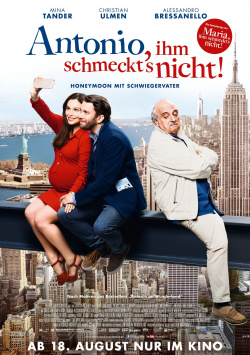 Jan (Christian Ulmen) has made it: despite the rejection he faced, especially from his father-in-law Antonio (Alessandro Bressanello), and the mess he made of the visit to Italy, the love of his life Sara Marcipane (Mina Tander) has married him. Actually, this should be celebrated with a romantic honeymoon to New York. But work put a spoke in the couple's wheel. Now Sara is heavily pregnant and soon they will be a little family of their own. Relaxed love vacations will be over for the time being. In order to fulfill Sara's big wish, Jan organizes a spontaneous trip to New York. Finally a honeymoon for two! The couple's happiness is perfect - until Papa Antonio decides to accompany them. And so the dream vacation turns into a real nightmare already at the airport, which puts not only his already difficult relationship with his father-in-law, but also his entire marriage to a hard test for Jan.

There are always movies where you wonder after just a few minutes what could go so completely wrong here. You have actors who have proven time and time again that they can actually act really well. You have a successful and really funny book, whose predecessor has already been filmed quite successfully. So you would think that a film like Antonio, ihm schmeckt`s can't just be a humorous hit. But unfortunately far from it. Because the comedy loosely based on the bestseller Antonio in Wonderland is many things, but not funny. Certainly, Maria, ihm schmeckt`s nicht also had to struggle with some weaknesses. But the box-office success made up for these with a lot of charm and wit. And that is exactly what the sequel just does not want to succeed.

This primarily concerns the characters. In the first film, Christian Ulmen succeeded very well in never making Jan seem like an unsympathetic small-minded person, despite all his quirks. Here Jan was a great sympathizer, who one wished would survive the visit to the family of his future wife without breaking up their relationship. In Antonio, ihm schmeckt`s nicht, on the other hand, Jan has been degraded to a complete idiot, who is even too stupid to clear up the simplest misunderstandings. Even worse is the character of father-in-law Antonio. He was already a little bit exhausting in the first movie, but the script and the acting of Lino Banfi made him not only a lovable, but also a quite interesting character. In the sequel, however, Antonio is just an annoying egoist who torpedoes his daughter's marriage in such an unsympathetic way that you just can't like him - no matter how hard Banfi's successor Alessandro Bressanello tries.

In addition to the characters, the production is unfortunately disappointing all along the line. The play with clichés, which in the first film still resulted in a funny and quite enigmatic culture clash comedy, falls here frighteningly flat. Moreover, there are scenes that seem to be extremely sloppy, just to offer a funny or nice picture. For example, Jan and Sara go shopping for baby utensils. Jan says to all the purchases what a big package it is, whereupon the saleswoman assures him that they would offer a delivery to Germany. Seconds later, however, Jan is seen walking through the streets of New York with the (apparently very light) package. Yes, it might look quite amusing, but it makes no sense at all after the conversation with the saleswoman.

If the rest were true, such illogical things wouldn't stand out at all. But alas, Antonio, He Tastes Good isn`t just a collection of things that don`t work. I really wanted to like this movie, as I quite enjoyed the first part. Besides, I like Christian Ulmen and Mina Tander as actors per se and I remember director Sven Unterwaldt as a very likeable and humorous person after a conversation I had with him during a press visit in a Frankfurt cinema some years ago. Still, for all my love, I can only say one positive thing about this film: it is, after all, not the worst German comedy of recent months. But that's still not enough to recommend a visit to the cinema. And so the conclusion is a disappointed: Unfortunately not worth seeing!