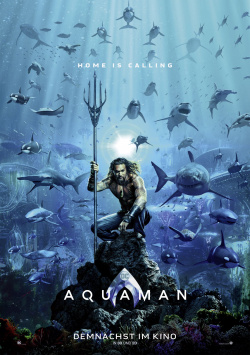 Arthur Curry (Jason Momoa) is no ordinary man. He is half human, half Atlantean. He uses the powers he inherited from his mother Atlanna (Nicole Kidman) to fight pirates and other villains as Aquaman. But not much else connects him to the mystical underwater world. But then the Atlantean warrior Mera (Amber Heard) shows up, intent on convincing Arthur to follow his destiny to take the throne of Atlantis. This, she says, is the only way to prevent a war that would threaten the people on land as well. But Arthur won't hear of it - until he meets his half-brother Orm (Patrick Wilson) and recognizes his dangerous thirst for power. But in order to defeat the Ocean Master, he needs a legendary weapon guarded by a dangerous being - and this guardian is something even the greatest fighters have not been able to get past.

After his successful appearance in the not really perfect Justice League, Jason Momoa now gets his first solo appearance with Aquaman. In the director's chair was James Wan, who has launched three successful horror franchises with Saw, Conjuring and Insidious, and flushed well over $1 billion into the box office with Fast & Furious 7. So now he gets to try his hand at the DC Universe, which has often been criticized (not entirely unfairly) not only by critics, but by fans as well. Sure, the script isn't exactly award-worthy good in this film either, and there's CG overkill towards the end. Still, Wan manages to do something that Zack Snyder's films have almost completely lacked. Wan's Aquaman is just plain fun!

His production is peppered with a wonderfully self-deprecating wink. Wan is well aware of the trashy nature of this superhero and his underwater world - and he celebrates that with total abandon. The result not only looks very good and takes the viewer into a colorful as well as imaginative underwater world. By the fact that James Wan has not gone to work with that sinister seriousness that has determined Snyder's DC films, creatures or scenes that would otherwise have seemed unintentionally funny to ridiculous, seem rather funny and charming.

The same goes for lead actor Jason Momoa, who just by his play laced with slight irony gives the character of Aquaman a coolness that the comic book template rather lacks. Okay, some of the dialogues that Momoa has to say belong to the category of being embarrassed and can't be explained as self-deprecating. But even if the film is far from revolutionizing the superhero genre due to its weaknesses, it offers its audience exactly what you can expect from a successful comic book adaptation: action, great effects, good-humored actors and a lot of fun. And for that there is a very clear: Absolutely worth seeing!