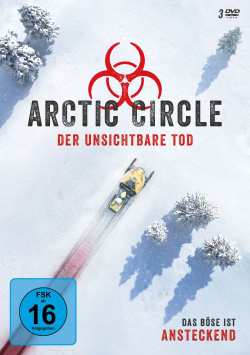 Film: In icy Lapland the policewoman Nina Kautsalo (Iina Kuustonen) and her colleague find the badly battered Russian prostitute Evgenya in a remote hut. When two dead women are found a short time later near the Russian border, it seems to be a clear case of human trafficking. But then the whole thing takes an unexpected turn when a virus is found in Evgenya's blood, causing miscarriages, deformities and ultimately death. German virologist Dr Thomas Lorenz (Maximilian Brückner) is sent to Ivalo to examine the virus and prevent it from spreading. Nina is to assist him in his investigations. In doing so, they not only face a possible pandemic, but also a dangerous opponent who can only be defeated if they leave the usual investigation paths…

Exactly in the first minutes of the first episode it becomes clear what the strength of "Arctic Circle - The Invisible Death" is: in the fascinatingly beautiful, but at the same time threatening atmosphere of the great landscape shots captured in the Finnish part of Lapland. The basic mood, which is already visually built up here, is intensified by the coincidental topicality of the story. The plot is a little bit overloaded here and there, but overall it is told in a thrilling way and especially the two main actors play it very well.

Where the series is particularly weakened dramaturgically is the way the private lives of the two main characters are integrated into the story. Especially with Nina this seems to be forced, because she is personally affected by the investigations twice. First, because her sister is tested positive for the virus right at the beginning, and later, because her ex-husband seems to be involved in the case, too. For Thomas, on the other hand, it becomes personal when his wife shows up in Ivalo and afterwards files for divorce, believing that he is cheating on her with Nina. And suddenly the virologist not only has to save the world from a pandemic, but also has to fight for custody of his daughter. This is all a little too much of a good thing. </Nevertheless: Even though there are too many side scenes and stereotypically drawn characters, "Arctic Circle - The Invisible Death" can keep the tension up almost until the end. The resolution is not very original, but it can surprise a little bit. Overall, this mini-series is entertaining, visually engaging and well played. The dramaturgical flaws are always in the way of the tension, but the positive aspects are strong enough, so that there is enough for a conciliatory "worth watching" at the end! </p>

image + sound: The fascinating snowy landscape of Lapland makes up the largest part of the setting, even though the plot is also set in other places like Helsinki and Amsterdam. The landscape shots are shown to their best advantage on the DVD. Sharpness, depth of field and colouring leave a positive overall impression. The sharpness of details on the other hand reveals here and there small weaknesses, which never really show up negatively. The sound is available as a Dolby Digital 5.1 mix, which makes the powerfully mixed dialogues, but also the ambient noise and a few good sound effects sound harmoniously coordinated from the home cinema boxes. Good! </Unfortunately the DVD box does not offer any bonus material. </p>

Conclusion: "Arctic Circle - The invisible death" is a quite exciting mini-series, which has received a very current explosiveness by the Corona pandemic. However, some plot lines are too contrived and especially the supporting characters remain too pale to be able to really inspire over 10 episodes. Atmospheric landscape shots and the good leading actor duo Iina Kuustonen and Maximilian Brückner at least make up for some of the weaknesses. The DVD offers the ten episodes in good picture and sound quality, unfortunately there is no bonus material. All in all this is enough for a decent: Recommendable!