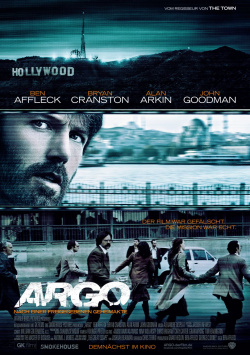 Ben Affleck's career has often taken strange paths. A few roles in acclaimed independent films like Dazed and Confused and Chasing Amy were followed by an Oscar for the screenplay of Good Will Hunting. But as high as Affleck rose, his fall was equally low when commercial hits like Armageddon were followed by some less successful productions and then, with his relationship with Jennifer Lopez, his personal life became more of a focus than his work. At some point Affleck was just not taken seriously by critics anymore, his career seemed to be slowly but surely at the end. But then something completely unexpected happened: Ben Affleck delivered a more than convincing directorial debut with Gone Baby Gone, and with the follow-up The Town he even managed to surpass this success. Not only as a director, but also as an actor, Affleck has earned a lot of respect from audiences and critics alike. Now, with his third directorial effort, Argo, he impressively proves that he has fully earned that respect.

Based on true events, the film tells the story of the Iranian Revolution in 1979, at the height of which the U.S. Embassy in Tehran was stormed in November and 52 Americans were taken hostage. Six embassy employees managed to escape to the Canadian ambassador's house, where they hid from then on. It was impossible for the Americans to leave the country and it was only a matter of time before their escape would be discovered. Therefore, the U.S. government worked feverishly on a plan to get the fugitives out of the country. CIA agent Tony Mendez (Ben Affleck), a specialist in filtering out fugitives, devises a plan as crazy as it is ingenious: disguised as a Canadian film crew scouting locations in Iran for a Star Wars print titled Argo, the six men and women are to be taken to safety. With the help of makeup artist John Chambers (John Goodman) and Hollywood producer Lester Siegel (Alan Arkin), Mendez builds the perfect cover. But once in Tehran, the plan seems to fail prematurely due to the fugitives' frayed nerves.

With Argo, Ben Affleck has achieved a real feat in more ways than one. For one, his film is one of those stories whose outcome is widely known. Nevertheless, Affleck perfectly manages to build up a gripping tension, which rises to enormous heights, especially towards the finale. In addition, he finds the perfect balance between drama and comedy, so that the result is the best entertainment cinema on a very high level. This is exactly how the film manages to tell its inherently very political story in a rather apolitical way, making it accessible to a wider audience than political dramas generally are.

However, Affleck doesn't water down the facts at all to make his film more entertaining. Argo is very well researched and executed with great care. Even though Affleck takes some liberties, especially towards the end, the imagery in the credits alone makes it clear how authentically the events have been realized. Rather, it is the way this unbelievable but true story is presented that makes the film so successful and impressively confirms Affleck's reputation as a director. The storming of the US embassy, which seems threatening in an oppressive way, the constant fear in which the six fugitives find themselves and their liberation are extremely exciting and intensely realised. The scenes dealing with the build-up to the cover, the supposed shooting of the science fiction epic Argo, are full of humour and, like the glimpses into the workings of the CIA, offer plenty of great dialogue, often with an almost satirical edge.

The film is carried not only by the sophisticated dialogues and the first-class production, but also by a wonderful ensemble of actors, in which none of the actors plays himself into the foreground, but each plays the balls to the other in perfect timing. Whether it's Bryan Cranston (Breaking Bad), John Goodman, a wonderfully biting Alan Arkin, or Ben Affleck himself, they all make Argo a great piece of acting cinema that is being talked about as a hot contender for the 2013 Oscars, and not without reason.

The political examination of the story on which Argo is based takes place in a rather restrained manner. In doing so, Affleck avoids taking sides very well. Of course, he doesn't excuse the actions of the hijackers, but neither does he deny the culpability of the American government in the matter. But the film doesn't want to be a history lesson, despite its closeness to reality, but an entertainment film, in which the intellect is not neglected. And if you are looking for something like that, you shouldn't miss one of the best movies of the year. Absolutely worth seeing!!!