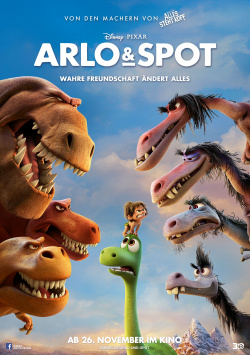 Many millions of years ago, a meteorite struck the Earth, leading to the extinction of the dinosaurs. But what if that meteorite had missed the Earth? What might have been then is shown in the new Disney/Pixar production Arlo & spot. Millions of years after the near-collision, dinosaurs have evolved significantly. Little Arlo lives with his parents and two siblings on a small farm in the American Northwest. While his brother and sister reveal courage, strength and skill while working in the fields, young Apatosaurus lacks all of these qualities. Yet he would love to make his parents proud. But when he fails in his mission to protect the crops from a small pest because he can't kill the wild human child, the consequences are fatal: in the pursuit of the human, Arlo's father is killed. Now Arlo's world is finally in ruins. But fate brings the dinosaur and the little human boy together again, and together they must endure an adventure from which an unusual friendship seems to emerge.

The animated film Arlo & Spot has had a difficult production history. Various screenwriters, directors, and voice actors were worn out until the film's repeatedly postponed release. In some ways, the result is indicative of that. Because while the dino adventure is really top-notch from a technical standpoint, and features some of the best landscape animation seen in cinema to date, the story has turned out to be arguably conventional. It almost seems like Disney and Pixar just cobbled together a best-of from the studios' trove. A little bit of Jungle Book, a little bit of The Lion King, a pinch of Finding Nemo and of course a lot of dinosaurs and the story of Arlo & Spot.

It's not a big deal that the story about courage, friendship and family is a bit unimaginative. It only stands out as a bit of a negative because just a few weeks ago a Pixar film came to our theaters, Everything Standing on its Head, which was a feast of originality not only visually but dramaturgically, proving that animated films can be quite profound as well. Arlo & Spot is far from that. Still, Arlo's adventurous journey with his little companion Spot is really fun. Aside from a few somewhat dark moments, the film offers plenty of good laughs, some emotional moments that will have you sobbing a little even as an adult, and some well-done moments of suspense that make the adventure engaging and exciting, especially for smaller viewers.

In 3D, some of the landscape shots look truly spectacular. But even in traditional 2D, this charming dinosaur tale offers plenty of great shots. In contrast to the very realistic landscape, the character drawing is kept deliberately comic-book-like, which of course works especially well for the titular heroes with their big googly eyes. Arlo & Spot may not be the best animated film of the year. There are far more accomplished candidates. But to immerse for almost 90 minutes in an enchanting world with an exciting story and many amusing moments, this work is just right. Not suitable for very young dino fans. But children from 7 years and also the accompanying parents will have a lot of fun here. Absolutely worth seeing!