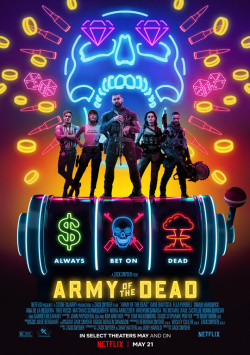 Army of the Dead

A mysterious zombie outbreak has left the gambling capital of Las Vegas in ruins. It has managed to seal off the city, preventing the zombies from expanding. You'd have to be crazy to get anywhere near the desert city. Maybe as crazy as Scott Ward (Dave Bautista), a former zombie war hero who is offered a tempting as well as dangerous deal by the heavily wealthy casino boss Bly Tanaka (Hiroyuki Sanada): Ward is to assemble a team to recover $200 million from a Las Vegas vault before the city is finally destroyed by the military with a nuclear bomb. The disillusioned veteran accepts the assignment, although he only has 32 hours to pull off the coup. The right specialists are quickly recruited - but what actually awaits them in Las Vegas is far more dangerous than imagined....

"Army of the Dead" marks Zack Snyder's return to the zombie genre, to which he had added a very watchable entry in 2004 with his remake of the classic "Dawn of the Dead". At the time, his zombies were markedly different from the slow, shuffling undead that had been familiar. Not all genre fans liked that. Still, there's no denying that Snyder's "Dawn of the Dead" was truly accomplished. Especially the opening sequence was among the best the horror genre of the early 2000s had to offer at the time. Also "Army of the Dead" promised after the first trailers to be a great zombie fun - a promise that the film unfortunately can not quite deliver.

Admit: Once again, the opening sequence is extremely well done - even if it lacks logic in some respects. But hey - this isn't a documentary after all, it's a zombie movie. So bygones be bygones, sit back and have fun. It's just a shame that Snyder can't quite decide on some points whether his film is supposed to be great trashy fun, or a serious zombie heist thriller. Dave Bautista at least seems to start from the latter, he really takes his role very seriously. There is no talk of fun factor here. Quite different is Matthias Schweighöfer as safe-cracker Dieter (are there really still relatively young people called Dieter in Germany?). He acts with obvious pleasure and steals the show from many of his colleagues again and again.

There are moments when Snyder skillfully celebrates the trash factor of his film (I just say: Zombie Tiger). But overall, the two-and-a-half-hour work seems too indecisive to be convincing across the board. "Army of the Dead" has really good ideas and strong moments, but overall doesn't get beyond a "very nice". But even if it has not become the big hit that just many "Dawn of the Dead" fans had hoped for, the whole thing is still entertaining fodder for a relaxing home theater evening. That's why, even with some sacrifices, there's still a decent one here: worth seeing!