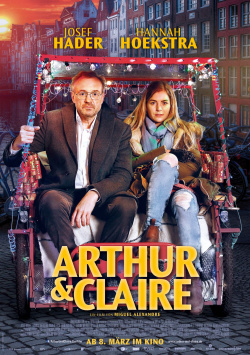 Charming alleys, picturesque houses, the fascinatingly beautiful canals - a visit to Amsterdam should actually always be accompanied by a genuine feeling of happiness. Not so for Arthur (Josef Hader). For Arthur has come from Vienna to Amsterdam to die here. He has one night left before his appointment at the clinic. He wants to spend this last night on earth in style with a delicious dinner and a good bottle of wine. But he is interrupted by young Claire (Hannah Hoekstra), who wants to take her own life in the hotel room next door. Arthur is able to prevent this, but the young woman doesn't seem to be really grateful. And so he attaches himself to her heels and a community of fate develops out of the two, which gives the two so different people, who had actually finished with their lives, a completely new view of their situation.

Arthur and Claire is a wonderful film about two people on the run that one night - he from his death, she from her life. The free adaptation of Stefan Vögel's play of the same name is an engaging mix of tragedy and comedy that entertains very well while also making you think. The film makes its audience laugh, but also brings tears to your eyes. Despite the rather heavy themes it deals with, you are not left with a depressing feeling at the end, but a very life-affirming mood full of hope.

The fact that the film works so well is, of course, largely due to the very well-written dialogue, but also to the actors who deliver it. Above all, it's the chemistry between the reliably good Josef Hader and newcomer Hannah Hoekstra, who play off each other perfectly, especially in the faster-paced exchanges. Neither in the humorous passages nor in the more emotional moments do the two lay it on too thick. So what happens between Arthur and Claire that night really feels genuine, which ultimately leads to the viewer really being swept away by this trip through Amsterdam at night.

Admittedly, the finale is arguably predictable and also feels a tiny bit contrived. But that's only a minimal flaw in an otherwise really wonderful film. Funny, sad, unagitatedly staged and great acting - the perfect ingredients for a successful evening at the movies. From me there is a clear: Absolutely worth seeing!

Cinema trailer for the movie "Arthur and Claire (Deutschland/Österreich/Niederlande 2017)"
Loading the player ...