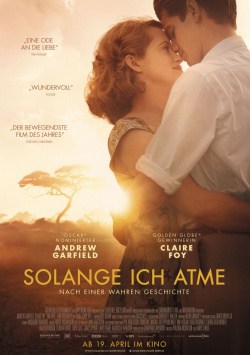 As Long As I Breathe

When young businessman Robin Cavendish (Andrew Garfield) and Diane Blacker (Claire Foy) meet in 1950s England, it's love at first sight. From then on, the life of the two resembles a great romance, which is heading unhindered to a happy ending. But before it can be called and they lived happily ever after, their fairy tale takes a dramatic turn: At just 28 years old, Robin falls seriously ill from an infection and is paralyzed from the neck down. He can't even breathe on his own. Doctors give him little chance of survival, but Diane isn't ready to give up on her husband. She gets Robin out of the hospital despite all warnings and fights doggedly to give him new courage to live. And indeed, they will prove to the world that love can be stronger than any disease.

As Long as I Breathe is the moving directorial debut of Andy Serkis (The Lord of the Rings, Planet of the Apes, Black Panther), in which he tells the true story of the latter's father Robin, assisted by Jonathan Cavendish. The latter was stricken with polio in his late twenties and seemed doomed to spend the rest of his life in a hospital bed. But with the unwavering dedication of his wife Diana and his friends, he has managed to find new courage to face life and continue his life outside the hospital despite his paralysis. Together with Oxford professor Teddy Hall, Robin Cavendish then designed a revolutionary wheelchair that enabled not only him, but later many others, to live a better life.

This was a story Jonathan Cavendish was desperate to have told. He found the right screenwriter in writer and playwright William Nicholson, whose script Andy Serkis adapted as his first-time director. The story is inspiring and moving - but is the same true of the film? That depends entirely on whether you're comfortable with the dramatic emphasis. If you want the whole thing told from a more factual, medical and biographical point of view, you might well be disappointed by the film. Because the focus is clearly on the love story of Robin and Diane. And that is sometimes very cheesy.

On the other hand: who has a rather romantic vein, this film will move very much. Because not only is it beautifully filmed and filled with many emotional moments, but it's also really well acted. And that leads to the fact that Robin's fate and the strength he draws from Diane's love gets to your heart extremely. In this case, be prepared for many a tear to flow - especially towards the end.

Borne by a truly wonderful ensemble cast, led convincingly by Andrew Garfield and Claire Foy, the film quickly makes you forget about many a minor flaw in the production. Andy Serkis is still undoubtedly a better actor than he is a director, but he definitely shows potential here that he can also deliver great things in this profession in the foreseeable future. If you like big, visually powerful emotional cinema and don't mind a little bit of kitsch, Solange ich atmeme can be recommended to you. Worth seeing

Cinema trailer for the movie "As Long As I Breathe (Großbritannien 2017)"
Loading the player ...