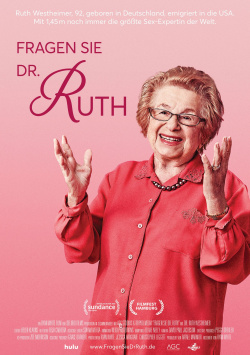 A Frankfurt girl, born Karola Ruth Siegel in 1928, has shaken up the sex lives of an entire nation. Her frank way of talking about sex has made Dr Ruth Westheimer a genuine phenomenon in the USA. With her strong German accent and a tremendous amount of joie de vivre, the therapist, who stands just 1.45 metres tall, never minces her words on any subject, no matter how salacious. In the extremely prudish America of the 1980s, her show "Sexually Speaking" was both a taboo breaker and a revolution. Never before could people talk so openly about topics such as the female orgasm, erectile dysfunction, secret preferences, masturbation or sex positions. Dr. Ruth became a true icon, appearing on talk shows, feature films and TV series, and selling millions of books. Even today, at over 90 years old, "Grandma Freud" is not a bit quiet. She still talks openly about sex and participated in protests against racism and police brutality in New York this summer.

In the wonderful documentary "Quest Dr. Ruth", director Ryan White uses archival footage, actual interviews, and animated passages based on diary entries and letters to paint a vivid and entertaining portrait of this truly special woman. Her open, cheerful and extremely endearing nature is not infrequently in stark contrast to the terrible things she experienced, especially as a girl and young woman. For example, when she was just ten years old, her parents sent her from Frankfurt to Switzerland. Here she survived the Nazi regime in a children's home, but her family fell victim to it. In 1945, she then emigrated to Palestine, where she joined the paramilitary underground organization Haganah and was trained as a sniper.

However, even though the documentary does not spare such dark chapters, its tone never becomes lurid or seems too thick. Ryan White is very good at striking the right tone at every moment - whether it's just looking back at Dr. Ruth Westheimer's childhood, taking a trip back to the early days of her radio show, or recording footage from her personal life. In this way he creates a pleasant mixture of humorous moments, moving moments and exciting insights into the work of an impressive woman.

"Ask Dr. Ruth" is a documentary really worth watching. It is not only an entertaining portrait, but also a stirring piece of contemporary history in more ways than one. A film that moves and at the same time makes you really happy due to the infectious cheerfulness of the protagonist. For this, there is clearly a: Absolutely worth seeing!