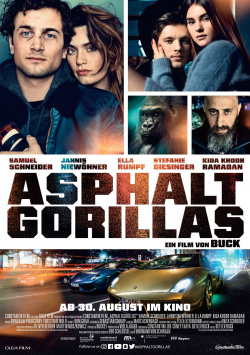 The young dealer Atris (Samuel Schneider) dreams of finally not having to work for the drug lord El Keitar (Kida Khodr Ramadan) anymore. Atris wants to make the really big money - just like his old buddy Franky (Jannis Niewöhner) seems to have succeeded in doing when he picks him up in his fancy Lamborghini. What Atris doesn't know is that the car belongs to Franky's girlfriend Oxana (Stefanie Giesinger). He himself doesn't have a cent, just a lot of debt. He wants to get rid of them with a foolproof counterfeit money deal. Under the pretext of buying a flat, Franky borrows 200,000 euros from Oxana's father and persuades Atris to help him carry out the counterfeit deal. It could all be so easy and lucrative for the two young men - were it not for everything that can go wrong that night.

After the hugely successful Bibi & Tina films, Detlev Buck now turns his attention back to more adult themes. With Asphalt Gorillas he delivers a mixture of gangster thriller and big city comedy, which can score with an atmospheric visual language and some very original ideas. But despite many positive aspects the spark never really wants to ignite. In an effort to be cool and clever, the story gets lost in a jumble of plot lines that are sometimes more, but sometimes less convincingly constructed.

The characters rarely manage to earn genuine sympathy points from the audience, which doesn't help in keeping the audience hooked to the story. The humor feels a bit indecisive, meandering back and forth somewhere between over-the-top silliness and black-humored bizarreness. Buck, actually a guarantor for a bit of inappropriate humor, unfortunately only hits the mark very rarely. Even the cast, which is good in itself, can only pull out a little.

On previous Buck films such as We can also be different, Men's Pension or the excellent drama Knallhart come the asphalt gorillas therefore not approached, even if especially in the visual implementation a clear development of the filmmaker is recognizable. Detlev Buck succeeds very well in building up a very special atmosphere, but does not manage to establish a convincing story, rousing characters or funny gags in it. The result is a mishmash that is not bad, but leaves the viewer a bit perplexed and unsatisfied. Buck can actually do that much better - and that's exactly why the bottom line is a disappointed one: Conditionally worth seeing!