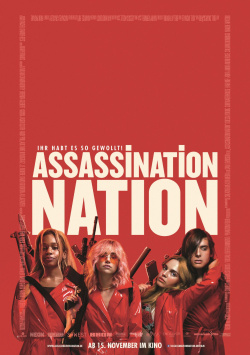 For friends Lily (Odessa Young), Bex (Hari Nef), Em (Abra) and Sarah (Suki Waterhouse), everyday life is about parties, choosing the right outfit and sex - all captured in selfies and snaps, shared on social media and in chats. It's a rut that makes for boredom on the one hand, but on the other, it also leads to a certain popularity for the girl gang in their small-town school. When their small town of Salem is targeted by a hacker who makes all of the citizens' private photos and chats public, there's an uproar in the otherwise tranquil town. Law and order are quickly lost and anarchy spreads. When Lily is blamed for the hack, the situation threatens to escalate fully.

Assassination Nation is a film that skillfully holds up a mirror to society at moments. It paints a rather disillusioned picture of a youth that doesn't seem to care about privacy. In which all that matters is generating as many followers and likes as possible. But even adults are only too willing to reveal things about themselves, only to be completely surprised and snubbed when they are suddenly misused. It's amazing how many people still believe they would be anonymous on the net.

But the film reveals a certain hypocrisy particularly well: Even harmless images are used as a reason for a witch hunt, in the hope that with loud cries for morality and justice the own skeletons in the closet will be covered. In this respect, Sam Levinson has succeeded in making a relevant and thought-provoking film. One is repelled, especially as a somewhat older viewer, by the bored arrogance of the youths, focused only on their own egos, but at the same time is shocked by the behavior of adults, who are supposed to be role models and a moral authority.

At one point, the film would have worked almost perfectly as a prequel to the Purge films. The social commentary being made is cynical, but spot-on. Unfortunately, the whole thing is sacrificed for an overblown finale in which the girls - all of whom are not really sympathetic characters - are overstyled into merciless action heroines. In the process, a very bleak, uncompromising ending first emerges that would have made the film and its message much more effective. Thus, Assassination Nation has become a somewhat half-baked work between satire, action and drama, which despite some very good aspects ends up wasting a lot of potential. And for that it only gets one in the end: Worth seeing with cutbacks!