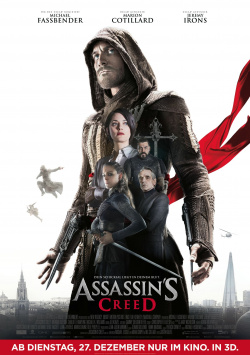 Actually Cal Lynch (Michael Fassbender) should be executed by lethal injection. However, after the injection, Cal does not die, but awakens in a secret facility owned by Abstergo Industries. Cal is of enormous importance to the powerful company, carrying genetic material that makes him the perfect candidate for a dangerous mission. Using revolutionary technology, the genetic memory hidden in his DNA is decoded, allowing Cal to be sent back to 15th century Spain. As Aguilar de Nerha, a distant ancestor, he must fight the Knights Templar in the secret society of the Assassins. It is a war for the preservation of free will - a struggle that continues into the present, as Cal soon discovers.

Assassin`s Creed is another example of how difficult it is to adapt video games for the screen. The film adaptation of the enormously popular games about the Assassins and the Knights Templar saw some heavy artillery being brought in: A big budget, a really good cast with several Oscar winners and nominees, great locations in Malta, Spain and England and an award-winning director with a knack for a very special visual language. Actually the best prerequisites - and yet the result just doesn't want to work. This is not because viewers who are not familiar with the Games will have difficulties following the story. It may be that some minor allusions won't be understood, but the story itself is actually simple enough at its core to not lose the thread.

It's more the fact that you don't care about the story or its characters at all. True, there is an attempt to give Cal a backstory with a little foray into the 80s that makes his character tangible. But it's just not enough to make you really feel for this character and desperately want to follow his fate for any length of time. It's also easy to pinpoint what this is due to: the not really convincing script. The dialogues are extremely flat, so that even inherently good actors like Michael Fassbender or Jeremy Irons could do something about it. And the fight sequences can't make up for it either. For they are indeed rousingly choreographed and in themselves very well executed. But there is hardly any variation, so that all the show values are displaced by extreme boredom after the third duel at the latest.

Assassin`s Creed has positive aspects. A lot of them. But they just don`t want to fit together to a coherent whole. So in the end there is nothing more than a nice looking shell, behind which there is not much more than a lot of hot air. With a bit more rough edges, more polished characters and better dialogues this could have been a really good game adaptation. But as it is, Assassin`s Creed unfortunately joins the ranks of video game adaptations that have to be called not really successful. And so, in the end, there is unfortunately only one: With cutbacks still worth seeing!