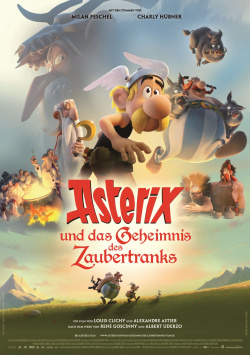 Asterix and the secret of the potion

That's all we needed: while Julius Caesar is still trying to occupy the whole of Gaul, there's a real problem in the small Gaulish village that successfully defies him time and again: after an accident, druid Getafix is thinking of quitting and wants to join Asterix and Obelix in the search for a successor. He also wants to entrust him with the top-secret formula for his magic potion. For the cunning druid Demonix, this is the perfect opportunity to get his hands on the formula. Together with the Romans, he devises a plan to hoodwink Getafix.

Asterix and the Secret of the Magic Potion is the second animated film Louis Clichy and Alexandre Astier have made about the world's most popular Gaul. After adapting the popular comic book The Trotting City with Asterix in the Land of the Gods, they get to tell a story all their own in the second film. Albert Uderzo and Anne Goscinny, the daughter of Ren&eacute; Goscinny, helped the filmmakers ensure that they could create a standalone story that still fit into the universe created by Goscinny and Uderzo, satisfying fans of the comics.

They've basically succeeded at that. There are numerous moments through which the spirit of classic Asterix adventures wafts. At the same time, however, it is clear that much of the charm and delightfully cryptic humour of the comic book original is missing and has been traded in for typical set pieces of contemporary animated films. The film therefore lacks the special stand-out feature with which the earlier Asterix comics created their cult status. Nevertheless: The reunion with the beloved Gauls is also in this second computer animation film clearly more successful, funnier and more sympathetic than that was the case with the much too overdone live-action adaptations.

After all: The makers have the courage to actually develop the story and thus send one of the most popular characters on new paths. Whether Getafix will really retire and whether the successor will finally allow Obelix to taste the magic potion he fell into as a child is of course not revealed here. But this much can be said: The attempt to enlarge the known universe a little bit and to gain new facets from it gives this cinematic adventure a certain charm. Not quite as funny as its predecessor, Asterix and the secret of the potion is, despite some small weaknesses for fans of Asterix, Obelix, Idefix and Co. worth seeing!

Cinema trailer for the movie "Asterix and the secret of the potion (Frankreich 2018)"
Loading the player ...