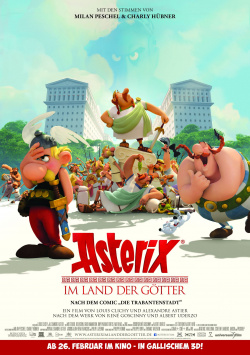 Asterix in the Land of the Gods

By Teutates! Julius Caesar has still not managed to occupy all of Gaul. This small village full of indomitable Gauls keeps thwarting his plans. But now it's time to put an end to all that. Caesar does not want to defeat the Gauls by force of arms, but by making them succumb to the temptations of the Roman way of life. To achieve this, a magnificent housing estate called The Land of the Gods is to be built just outside the small village. But Asterix, Obelix and Co. naturally want to prevent this. After all, it can't be right that the Romans should simply cut down their beloved forest and then set up home there. But when it is the slaves who suffer from the sabotage of the construction, the Gauls give in. The Romans can still kick the crap out of them later. But what awaits them after the luxury housing complex is built is a real challenge even for our brave Gauls.

Asterix in the Land of the Gods is based on The Trabant City, one of the best volumes in the cult comic series. Louis Clichy and Alexandre Astier took this template as a starting point to try out a new approach for an Asterix film. On the one hand, they wanted to go back to the roots, but on the other hand, they also wanted to take a big step in a new direction for the series: 3D computer animation. After the traditional animated films and the successful but artistically rather disappointing live-action adaptations, this was actually a logical further development. But this was not to take place without the involvement of Asterix creator Albert Uderzo. He was involved in the creation of the characters as well as in the elaboration of the comic story, which got some new facets in Astier's script.

The result is without doubt one of the best Asterix movies ever. Granted, some of the gags are arguably over-the-top and overly silly. But overall, the makers have succeeded very well in transferring the wit and charm of the comics to the screen. This is true for the visual realization as well as for the script. The computer-animated 3D look doesn't seem too slick and undercooled, but lets the viewer dive directly into the world of the Gauls in a wonderful way. In addition, there are countless little details to discover, which intensify the fun factor of the film even more. The familiar story has been very well expanded with some characters and plot elements, mixing some quite wonderful gags in classic Asterix style with contemporary slapstick to create an extremely fun whole.

Asterix in the Land of the Gods is one of those animated films whose humour works on several levels, so that both children and adults can take great pleasure in it. It is clear that the makers love the original and have treated it with the respect it deserves, but at the same time they have been able to bring their own style and new ideas to it. This is great cinema fun, which works well in 2D as well as in really good 3D and which shows in a very entertaining way why the inhabitants of the famous Gallic village have been a big cult for more than five decades. After the rather disappointing live-action adaptations, finally again a charming, funny and clever Asterix film that more than deserves an Absolutely Worth Seeing!

Cinema trailer for the movie "Asterix in the Land of the Gods (Frankreich 2014)"
Loading the player ...