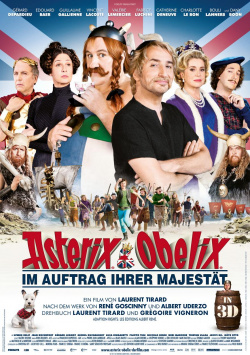 Asterix & Obelix: By Order of Her Majesty

They're off their heads again, the Gauls. But this time Asterix (Edouard Baer), Obelix (Gérard Depardieu) and the other inhabitants of the little village are stealing the Romans' thunder not in Gaul, but in Britain. There, Julius Caesar (Fabrice Luchini) hopes for a glorious conquest. And indeed it seems that the Britons cannot withstand the enemy siege much longer. But then the queen (Catherine Deneuve) sends her advisor Teefax (Guillaume Gallienne) to Gaul to ask for support in the fabled village, which supposedly possesses a powerful magic potion. And the Gauls, of course, don't take long. After all, beating up fresh Romans is their speciality. So Asterix and Obelix have to accompany Teefax to faraway Britain to supply the population there with a barrel of magic potion. However, on the journey they also have to take care of their chief's annoying nephew, the city boy Justforkix (Vincent Lacoste). And as if that wasn't enough, Caesar has also secured the help of the fearless Normans, who hope to finally get to the bottom of the mystery of fear, which is supposed to give them wings, in Britain. And so Asterix and Obelix find themselves once again in a crazy adventure, which becomes even more turbulent when they also lose the barrel of magic potion...

For Asterix & Obelix: By Order of Her Majesty, the latest live-action adaptation of the popular comic series, the two volumes Asterix with the Britons and Asterix and the Normans have been combined into one colourful (3D) adventure. While Gerard Depardieu was once again cast in the role of Obelix, the Asterix actor was once again replaced. Now Edouard Baer (Chicken with Plums) is allowed to put on the helmet of the clever Gaul for the first time. Even though the cast has been tweaked a bit - there is also a new Caesar in Fabrice Luchini (Personnel Only) - everything else remains the same. The humor is comically overdone, the actors act good-humored, but completely overdone and the gags move throughout on child-friendly humor.

While director Laurent Tirard, who could previously convince with his amusing adaptation of Little Nick, still manages here and there to mix a little cleverer humor into the colorful goings-on, making his contribution to the better live-action adaptations of the series. The guest appearance of Dany Boon (Welcome to the Sh`tis), for example, who is taught British manners as a wild Norman, provides some good laughs. And the completely exaggerated British clichés, which were processed in the character drawing, but also in the equipment, has high entertainment potential.

But otherwise this film adaptation again lacks that charm, which made the comic books so successful and popular. You can tell the film was trying hard to live up to the spirit of the original. Nevertheless, Asterix & Obelix: On a Mission from Her Majesty is first and foremost silly and colourful and not clever and charming. If you liked the previous live-action adaptations, however, you'll be thrilled again here, as this adventure in particular is far superior to its predecessor. Therefore: for fans of the comics again in most moments a disappointment, for fans of the movies but absolutely worth seeing!

Cinema trailer for the movie "Asterix & Obelix: By Order of Her Majesty (Frankreich 2012)"
Loading the player ...