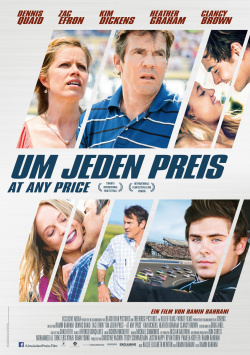 Although his property is growing larger and larger and he is part of one of the most successful farming operations in the area, Henry Whipple (Dennis Quaid) has to fight for his existence &acute;every day. He knows how tough the farming business is, and that if he doesn't keep expanding, he'll eventually just get swallowed up by the competition. Because that's exactly what he keeps doing to smaller, debt-ridden farms, too. In order to secure his business for the future, Henry hopes that his son Dean (Zac Efron) will one day take his place. But Dean has very different dreams. He's determined to become a race car driver, and he's already on the verge of a breakthrough. But when the Whipples' farm becomes the focus of an investigation by a major seed company that threatens everything the family has built for three generations, the cards are completely reshuffled for Henry and Dean - with dramatic consequences.

With At Any Price, director Ramin Bahrani has crafted not only a family drama but also a visually engaging portrait of the U.S. Midwest that grapples with the power of large corporations over farmers. At the center is a fictional seed producer, in name only, who forces his customers to buy their genetically engineered product year after year. Anyone who reuses or even resells seed from their own yield must reckon with severe penalties, which can be so high that they can deprive an entire farm of its livelihood. Natural seeds are therefore hardly available any more. Against this unfortunately very real background, Bahrani has set a rather conventional father-son conflict, which, however, works quite well for long stretches due to the convincing actors.

There are indeed a few scenes, especially at the beginning, that fizzle out and are simply meant to make even the last viewer realize how much Dean rebels against his father. In these moments At Any Price can hardly convince, at least dramaturgically. But when it becomes clear under which constantly growing pressure Henry is and how he also overrides moral boundaries to counteract this pressure, the prominently cast drama has an intensity that one would have wished for other aspects of the production.

However, again and again there are scenes in which the action plods along somewhat ponderously and in which clichéd dialogues set the tone. But towards the end, Bahrani manages to turn things around with a dramatic plot twist and steer the film into more rousing waters. The last twenty minutes are the most interesting moments of the drama, especially on a moral level, and one would simply have wished for a slightly better script given the power that can be detected here and the good performances delivered by Dennis Quaid and Zac Efron in particular.

Below the line, At Any Price has a great many successful aspects that are interesting in terms of content, which make the film well worth watching even despite some clear weaknesses. Nevertheless, at the end the feeling remains that just this topic in even better, more exciting and above all also more important film would have given. That's why I only give it one: With cutbacks worth seeing!