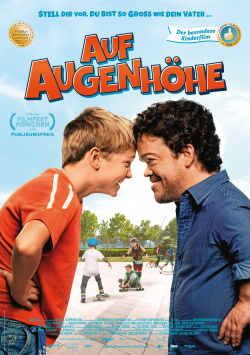 When ten-year-old Michi (Luis Vorbach), who has been living in an orphanage since the death of his mother, finds a letter that his mum has sent to his biological father, the boy gets hope. With this letter he can find his dad and he will get him out of the orphanage. Maybe Michi has the chance for a happy childhood after all. The boy does indeed track down his father. But when he stands in front of him, Mich is shocked: Tom (Jordan Prentice) is short and not even as tall as he is. The two only approach each other with difficulty - but when they finally meet eye-to-eye, it's no longer size that stands in the way of their future as father and son.

With At Eye Level, Evi Goldbrunner and Joachim Dollhopf have directed a very beautiful story about friendship and tolerance. The drama has some very true to life moments, a little bit of humor and very good actors. Especially Michi's anger and disappointment that his father is not the super dad he imagined in his dreams and that now there is one more reason for the other kids to raise him is believably realized as well as Tom's frustration that he can't be the father for the boy he expected.

However, there are also aspects of the film that, while well-intentioned, feel a bit too contrived or cautionary in their execution. In addition, there are some stretches, especially in the middle section, where the story goes a bit in circles before it comes to a thoroughly surprising twist in the final act. However, due to the somewhat too detailed structure of the story, this twist only has little time for a resolution. And so the finale then also seems a bit too rushed and a bit half-baked, which makes the effect of the idea, which is good in itself, fizzle out a bit.

All in all, however, Auf Augenhöhe is a successful drama that appeals to slightly older children, but also adults and entertains properly. In addition, there are a few very nice moments that make you think and discuss. And for this then nevertheless very coherent overall package there is, despite some weaknesses, on balance a deserved: Worth seeing!

Cinema trailer for the movie "At eye level (Deutschland 2016)"
Loading the player ...