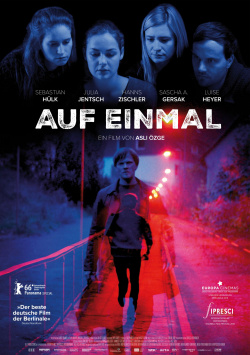 It was a lavish party. But now almost all the guests have left and Karsten (Sebastian Hülk) is alone with the mysterious Anna. Between the two it begins to tingle and they kiss. But a short time later Anna is dead. Everything looks like a tragic accident. But there are doubts about Karsten's story. His private environment, his girlfriend (Julia Jentsch), his buddies and his colleagues question his innocence. And all of a sudden, his hitherto well-ordered life seems to be completely unhinged. Behind the façade of small-town bourgeoisie, hypocrisy and malice begin to seethe - with unexpected consequences.

With her German-language debut Auf Einmal, Turkish-born Asli Özge (Men on the Bridge) has staged a psychological thriller that is surprising in many ways. Surprising is not only the plot, but especially the fact that the film works so well. That's not what it looks like at first. The staging seems to be too worn to actually create something like suspense. What's supposed to be gripping about watching the protagonist walking through empty streets for what feels like minutes, or watching silent characters? Yes, it's very unwieldy and also a bit exhausting. But it soon becomes apparent that this idiosyncratic style has a point.

Because Özge manages in this way very subtly but extremely effectively to build up an atmosphere that is hard to escape. So you let yourself drift by the quiet but somehow depressing course of the story, until the director presents a real bang for the finale, which comes across extremely powerful in this setting. The final act of the film is simply magnificent and makes the sometimes somewhat arduous journey to get there absolutely worthwhile. The atmospheric camerawork and very good acting, especially by Sebastian Hülk, intensify this impression.

At Once dives completely unexpectedly down into the human abyss and surprises with a bitterly evil look behind the hypocritical curtain of the well-behaved bourgeoisie. This is cynical, gloomy - and simply good! If you appreciate gripping German art house cinema and don't mind a somewhat difficult narrative pace, you shouldn't miss this film for the last ten minutes alone. Therefore: despite some small lengths absolutely worth seeing!

Cinema trailer for the movie "At Once (Deutschland 2016)"
Loading the player ...