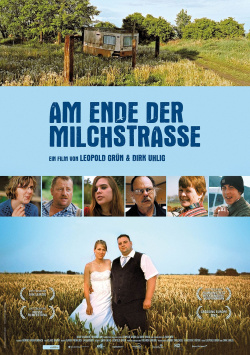 At the end of the Milky Way

A small village somewhere in Mecklenburg-Vorpommern: the area seems forgotten by society. There are no shopping possibilities, from time to time a supermarket car comes along, which offers the inhabitants the most necessary things. The infrastructure is not very well developed, the bus rarely stops near the entrance to the village. There are hardly any job opportunities, there are no future prospects. And yet the people here have found a way not to have to leave their homeland, to defy all misery and to reflect together on old virtues. They live on the verge of the subsistence minimum, but they do not allow themselves to be got down by it. Mutual help and the use of natural resources enable the community of 50 souls to live a life that can hardly be imagined in the large cities determined by constant change.

In their documentary film "At the End of the Milky Way" the filmmakers Leopold Grün and Dirk Uhlig portray this unusual village community. Representative for the inhabitants, the cameras follow farmer Maxe, his partner Cordula and her daughter Nicole, five-time mother Gabi and her son Maik, boy Ulli, hobbyist Harry, sociable Oli and Ronald, Gabi's 73-year-old father-in-law. The filmmakers follow these protagonists through their everyday lives with almost stoic calm at the very beginning. They show people working, thinking about life together, at the annual village festival or at the rather bored Zeittotschlagen. The protagonists talk about their life in the secluded village, the difficulties associated with it, but also about the beautiful sides, about their dreams, wishes and worries. It's a quiet, very personal film, based on a really interesting basic idea.

However, it unfortunately makes it very difficult for the viewer to maintain the basic interest that the premise knows how to build up. Because the decision of the filmmakers to withdraw completely and only act as observers makes the whole thing a bit bulky and exhausting, especially at the beginning. Thus in the first twenty minutes hardly a word is spoken and the protagonists are introduced to the viewer neither by text insertions, nor by comments or the like. You don't know where the documentation is located or who you're dealing with. This creates an emotional distance at the very beginning, which is then difficult to break down again.

Another problem that arises with this type of staging is that potentially interesting aspects are only touched upon, but not deepened by an additional flow of information on the part of the filmmakers. One example is the opening sequence, which shows how the rolling supermarket stops in the community and some of the residents shop there. After that the car disappears again and with it all the information that you might have liked to know as a spectator. Sure, in many scenes the narrative style of the movie is very authentic and honest. Nevertheless, the life of the villagers "At the end of the Milky Way" raises an incredible number of exciting questions, especially for the cinema audience in the city, which unfortunately remain largely unanswered by the documentary. Instead, there are many very long snapshots that take a sympathetic and genuine look at the lives of the people in the community portrayed. This has its charm and is also very entertaining in some moments. But you really don't have to go to the cinema for that.

Cinema trailer for the movie "At the end of the Milky Way (Deutschland 2012)"
Loading the player ...