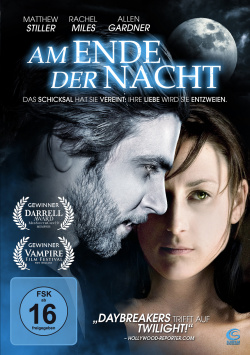 At the End of the Night - DVD

Movie: When shy Johnny (Matthew Stiller) meets the confident Elizabeth (Rachel Miles) in a bar one night, he falls head over heels in love with the attractive as well as mysterious young woman. The more inexplicable for him is that Elizabeth also seems to have feelings for him. The two are henceforth inseparable, until Johnny confesses his love to Elizabeth. Her reaction to this revelation leaves Johnny distraught and heartbroken, convinced that his relationship with Elizabeth is over. When he is seriously injured in a car accident and is dying, Elizabeth regrets not confessing her feelings. But she is to be given a second chance. Because before Johnny succumbs to his injuries, the mysterious Seth (Allen Gardner) shows up, who can bring the dying man back to life. However, this has a high price: Johnny must henceforth eke out his existence as a vampire. He finds this enormously difficult to deal with. And when he learns about Seth's connection to Elizabeth, it doesn't make his new fate any easier...

At the End of the Night, shot in Memphis, Tennessee in just 38 days, seems at first glance like a low budget version of the Twilight movies. However, this comparison, not entirely unintentional on the part of the makers, can really only be sustained at first glance. Because even if similar themes are touched upon, this little independent film goes its own way. Because unlike Bella, Elizabeth doesn't have to choose between two men, but whether she's ready to trust a man enough to feel something like love. Having been abandoned by her father and having her stiff-upper-lip father be a less than positive influence on her life, this is an almost overwhelming hurdle for her to overcome only in the face of Johnny's impending death.

On the other side is the emotional Johnny, who even as a vampire can't help but think of the welfare of the love of his life. That's why he turns his back on her and toward the sly vampire Raven (Rachel Kimsey), arguably the film's most interesting character. Seth, portrayed by screenwriter Allen Gruber, has quite a promising background, but overall this character falls rather flat. The same goes for much of the production. Although the story itself can convince as a vampire romance, the low budget, the short shooting time and the relatively inexperienced main actors are definitely noticeable in the final result.

So in the end it can be said that At the End of the Night is far more interesting in terms of content than other vampire romances. The craftsmanship, however, prevents the film from living up to its existing potential. Who Twilight is too superficial and True Blood too bloody, who also appreciates American independent cinema and can see over minor weaknesses, should give this vampire romance a chance.

Picture + Sound: The image transfer of the DVD is over large parts of the film on a good level. Only here and there are slight image noise and small blurs recognizable. Otherwise, however, the visual transfer convinces with an atmospheric color scheme and a decent overall sharpness. The sound has no real highlights to offer, with movement in the surround taking place only very sporadically. On the whole, the action is determined by well-matched dialogue and music.

Extras: In addition to the trailer for the film and other program tips from the provider, the DVD still has a picture gallery and a worth seeing Making of (approx. 28 min.) to offer, which is presented, however, without subtitles.

Conclusion: At the end of the night seems a little like a low budget version of the Twilight films, although the story goes on closer inspection quite its own way. Even if there are clear weaknesses in the performances of the actors and the implementation of the not uninteresting dramaturgy, fans of vampire romances can definitely give this production a chance. Those who are able to speak English can also learn about the making of the film in the good making of