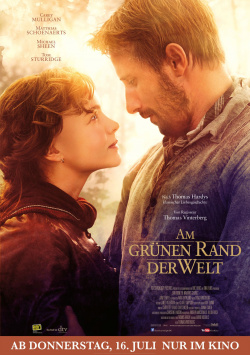 At the Green Edge of the World

Farmer's wife Bathsheba Everdene (Carey Mulligan) leads a modest but happy life in 19th century England. She enjoys being independent and being able to support herself. Although she is attracted to shepherd Gabriel Oak (Matthias Schoenaerts), she declines a marriage proposal from him. Her independence is simply too important to her. Years later, the two cross paths again. While Gabriel has lost his entire herd and is looking for work, Bathsheba has risen to become a wealthy landowner through an inheritance. Little has changed in her outlook on life, however, which is why she is not only willing to give Gabriel employment as a shepherd. She also turns down a proposal from wealthy William Boldwood (Michael Sheen), despite all the advantages. It seems that the young woman just doesn't want to let a man run her life. That changes, of all things, when she meets charming officer Frank Try (Tom Sturridge). Suddenly she throws all her reservations overboard and makes a rash decision - with fatal consequences...

The writer Thomas Hardy (1840 - 1928) was not only a master at telling epic stories. Time and again, he also created very modern female characters in his books that were so unlike the female-blindness prevalent at the end of the 19th century. Arguably one of the best and most popular characters penned by Hardy is Bathsheba Everdene from On the Green Edge of the World, who remains an inspiration figure for numerous other literary characters to this day. Kantniss Everdeen from The Tributes of Panem, for example, is one of the most recent examples of novel characters said to have been based on Bathsheba. Danish filmmaker Thomas Vinterberg, who most recently wowed with the intense drama The Hunt, is also generally fascinated by complex and strong characters. Therefore, he was certainly the perfect choice to adapt a novel by Thomas Hardy for the screen.

At the Green Edge of the World is probably Vinterberg's most conventional and commercial film to date. He delivers very straightforward, big emotional cinema that offers few surprises. Only in a few moments, such as the dramatic demise of Gabriel's flock of sheep, is Vinterberg's very special aesthetic apparent. But the fact that the film otherwise treads more of the usual paths of common costume dramas should not be taken as a negative criticism. For apart from a few minor lengths, Vinterberg has succeeded in making a very good adaptation of the novel, which scores points with a wonderful visual language, strong actors and a story that goes to the heart.

In the process, of course, the extensive book template has been significantly shortened. But screenwriter David Nicholls (Great Expectations, Two in a Day), a successful writer himself, manages very well to reduce the story to its essentials without leaving too many gaps. True, there are a few moments that feel a bit rushed or where you would have liked them to have gone into a bit more depth. But all in all, the adaptation leaves not only a very positive overall impression, but also an unusual lightness, especially for Hardy's work, from which the entertainment value of the film in particular can clearly benefit.

The actors also deliver very good performances overall. Carey Mulligan may look like she's about to go on a tear in every scene, and Matthias Schoenaerts also fails to reveal his full acting range. But their acting is very well suited to the roles they embody. Truly wonderful is Michael Sheen as the hopelessly romantic landowner who remains a gentleman even in moments of greatest disappointment and reveals himself to be a very noble loser in the end. And Tom Sturridge, finally, manages very well to fool not only Bathsheba but also the audience with his initial charm.

On the Green Edge of the World is a must-see for all lovers of great emotional cinema and of epic costume dramas. If you expect nothing more than a visually stunning adaptation of a novel about love and independence in Victorian England, this is one not to be missed. Worth seeing

Cinema trailer for the movie "At the Green Edge of the World (USA/Großbritannien 2015)"
Loading the player ...