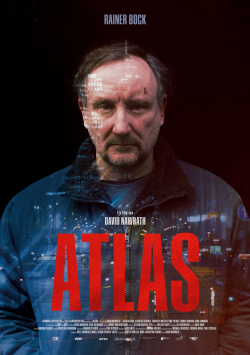 The quiet furniture mover Walter (Rainer Bock) works for a forwarding company that is hired to carry out evictions. Even in the Christmas season, Walter and his team are supposed to clear out a family's apartment in Frankfurt's Nordend district. But when the former weightlifter sees young family man Jan (Albrecht Schuch) courageously standing up against the eviction, he thinks he recognizes in him his son, whom he abandoned many years ago. Now Walter tries to help Jan and his family. But to do so, he must not only stand up to his boss and confront the speculators, who will not shy away from violence to get the apartment. He also has to deal with the events from his past that led to him having to leave Jan.

With his feature debut Atlas, director David Nawrath tells a moving father-son story that he embeds in a very current theme. If you live in a city like Frankfurt, you will definitely understand the problems Jan and his family are facing. It is unfortunately a sad reality when Jan's wife, when asked to just take wart and move somewhere else, replies in frustration that this will happen to them again in the next apartment sooner or later. Finding affordable housing in the city where you work is just getting harder and harder. Of course, there isn't actually a criminal organization behind every redevelopment and accompanying rent increase, as shown in this film. But cases in which tenants are to be mobbed out of apartments by unfair means in order to redevelop them and offer them at significantly higher prices are unfortunately also not uncommon.

Rainer Bock, who most recently enjoyed international success in the acclaimed series Better call Saul, plays his role with an almost stoic restraint that then really makes sense once the viewer learns what secret the mover is carrying around. Embedded in atmospheric shots of Frankfurt and a stirring subplot, a stirring family story unfolds tentatively but very intensely, which only loses a little of its power through the somewhat conventional epilogue. All in all, though, this is a powerfully staged and superbly acted drama that can be warmly recommended to lovers of somewhat calmer programme cinema fare from Germany. Worth seeing!

Cinema trailer for the movie "Atlas (Deutschland 2018)"
Loading the player ...