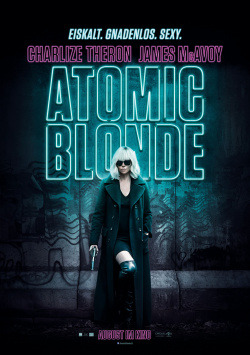 Berlin 1989: The fall of the Berlin Wall is imminent. The still-divided capital is a powder keg, with the superpowers trying to outdo each other with their espionage activities. After an MI6 agent is killed, British intelligence sends top agent Lorraine Broughton (Charlize Theron) to Germany to uncover her colleague's death and secure an explosive list of Western agents' identities. But no sooner does she arrive in Berlin than she herself is targeted by the killers. Together with Berlin-based David Percival (James McAvoy), Lorraine manages to escape the attempt on her life and track down the mysterious Spyglass (Eddie Marsan), who is believed to be in possession of the list. But this is only the beginning of an increasingly bloody web of conspiracy and betrayal that Lorraine is also destined to fall victim to.

In Atomic Blonde, it's once again apparent that David Leitch, co-director of the surprise hit John Wick, used to work as a stuntman in Hollywood for several years. The action scenes of his new film are again an absolute highlight and especially the fight scenes seem hard-hitting and real - in the age of CGI truly not a matter of course. With Charlize Theron Leitch has found a really good leading actress, who has not only implemented the action absolutely convincing. Immersed in a gloomy 80s look and accompanied by a great soundtrack, the ex-stuntman impressively shows that handmade action is still the measure of all things.

However, his spy thriller also makes it clear that action just isn't everything. And when it comes to gripping dramaturgy or the construction of cleverly interconnected conspiracies, the filmmaker still reveals some weaknesses. Despite excellent actors and an enormously cool visuals Atomic Blonde also has a surprising number of lengths. These are just made up for by the last act, which offers really brilliant stunts. But one would have wished that it would not have taken so long until the story really gets going.

Admittedly, when Lorraine to the sounds of Peter Schilling's Major Tom a hard-hitting duel in a moving car, then one accepts for such scenes gladly sometimes somewhat tougher dialogue sequences. Still, in the end you're left with the feeling that the story pretends to be much more complex and intelligent than it is on closer inspection. And that ultimately leads to the conclusion that Atomic Blonde, with a slightly better script, undoubtedly would have had what it takes to become a cult film of modern action cinema, but as it is, it doesn't offer much more than just good entertainment with a lot of show values. But that's still enough for an absolutely satisfied: Worth seeing!