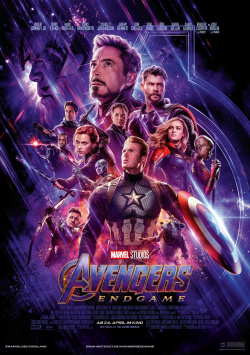 Some weeks have passed since Thanos (Josh Brolin) destroyed half of all living things in the universe just by snapping his fingers. While the surviving humans try to deal with their grief and loss, the remaining Avengers aren't giving up. They want to find Thanos, secure the Infinity Stones, and use them to bring back their chambermates, their friends, and families. In fact, they manage to track down the powerful foe and so begins a dangerous mission in which they get help from a new superhero: Captain Marvel (Brie Larson).

More shall not be revealed here about the content of Avengers: Endgame. After ten years and 21 films, this epic marks the end of an era. And it should not be spoiled for any fan by spoilers. Therefore, I will try to say as little as possible about the film. I will tell you in rather bold words how I personally, as a fan of the Marvel Cinematic Universe (MCU), enjoyed this grand finale. I'll provide a more in-depth examination of the plot, some of the many surprises, and the ending when the home theatrical release comes around.

At the outset, Avengers: Endgame gave me exactly what I was hoping for because the movie didn't deliver what I was expecting. Of course, like any other fan, I had my theories as to how the story would continue and conclude. But even though I was right on one or two points, I was completely surprised by the direction the story took after only a few minutes. I'm thrilled with how Anthony and Joe Russo not only resolved the mega cliffhanger of Avengers: Infinity War, but how they brought together seemingly countless plot threads into a more than worthy conclusion. In doing so, they make their viewers feel from the first second to the last that this movie was made by fans for fans. Yes, this kind of fan service, which is already very obvious in some scenes, could be criticized. But the way in which the whole thing is executed just works too well to really be bothered by it. On the contrary.

The biggest surprise - and this may be revealed - is how humorous the film has become. After the events of Infinity War, you really didn't expect to be treated to some of the funniest moments in the entire series. However, they are also hugely important as they act as the perfect counterbalance to some very emotional scenes - and they really do pack a punch. Anyone who doesn't shed a few tears there must really be made of stone.

Despite a running time of just over three hours, Avengers: Endgame lays down a coherent pace. It's very pleasing to note that there's really only one huge battle towards the end, with the usual CGI overkill. Otherwise, the focus is on the beloved heroes and their difficult mission. And this one not only has quite a few nice surprises to offer, but also numerous great moments that will put a happy grin on any fan's face (some of them are so well hidden, though, that you'll downright miss them if you blink just once too long).

Yes, the MCU will go on. And some of the characters will be seen again in more movies (Spider-Man, for instance, in just a few months). Still, in a very clear way, Avengers: Endgame marks a conclusion - a conclusion to one of the most successful film series of all time, a finale that makes you happy and yet also kind of sad, and an ending that can live up to all expectations, no matter how high. I would love to go into more detail and reveal which moments make this movie almost perfect for me, but of course I won't do that to you. So just this much: if you like the MCU, you will love this endgame. Absolutely worth seeing!!!