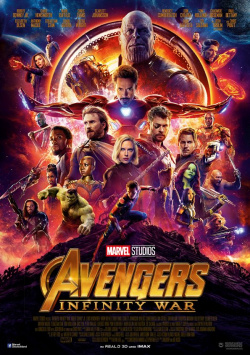 The community of the Avengers is broken! Two years have passed since Captain America (Chris Evans) faced off against Iron Man (Robert Downey Jr.), after which the Avengers went their separate ways. But now the superheroes are needed more urgently than ever: the powerful intergalactic villain Thanos (Josh Brolin) is threatening Earth in his quest for the six Infinity Stones. If he manages to get his hands on all six stones, he can wipe out millions of lives with just a snap of his fingers. Unstoppably, he approaches Earth, getting closer and closer to his goal. And with each Infinity Stone Thanos takes, his casualties grow, while the odds of defeating him dwindle more and more.

So here it is: Avengers: Infinity War, the movie the Marvel cinematic universe has been building toward for ten years now. Anthony and Joe Russo, who previously directed Captain America: Civil War, were faced with the mammoth task of not only bringing together (almost) all of the characters from the ever-growing MCU (Marvel Cinematic Universe), but also bringing a story that had been prepared in many of the previous films to a satisfying climax. With the result, they should absolutely satisfy most fans, but at the same time pose a huge challenge to film critics like me: I would love to write about so many details of the film here, flesh out my impressions, and go into more detail about the final act in particular (especially why - even though I think it's great - I have a teensy problem with it).

However, I can't do all that, as any form of spoilers would destroy the film's numerous surprise effects and harm the intensity of some scenes. And since I want to avoid that, I'll have to limit myself to a rather superficial review, which may then be followed by a more in-depth review at the time of the film's home release, when every fan has now truly seen it. So, with that being said, I can at least reveal why I'm giving Avengers: Infinity War the top score - even though there may be some minor valid criticisms.

The film is, of course, dominated by action sequences that take place on Earth, in space, and on various planets. There's a lot of crashing and at times it's a little overstuffed. But the Russo brothers create the appropriate counterbalance to these sequences again and again, on the one hand by a lot of humor, which goes primarily on the account of the Guardians of the Galaxy, but also by the wonderful quarrels between Iron Man and Doctor Strange arises. On the other hand, there are also some quieter, more emotional moments that work really well. And some of them - and this is a surprise I may reveal - actually involve the supervillain Thanos. The creators have managed to turn this character from a one-dimensional universe-destroyer into a surprisingly multi-layered character. His intentions aren't exactly new, but are at least portrayed in a comprehensible way, which makes his fight against the concentrated superhero alliance really exciting.

Although with the large number of characters it's bound to happen that some of them get a raw deal, the makers obviously made an effort to give every single character at least one big scene. And at this point I'll reveal something else that positively surprised me: It is just two rather small Marvel heroes who take a very central role in the story, which leads to the fact that they are not completely eclipsed by Iron Man, Thor and the other successful audience favorites.

Avengers: Infinity War has become exactly the film, which one could expect after ten years of MARVEL adventure as a preliminary climax. Big, technically perfect, thrilling, funny, emotional, involving - just good! And in the end, you can be happy that the next Avengers movie will be in theaters as early as next year, because the ending. no, that's all I'll say about that. But: remember, this is a MARVEL movie, so be sure to stay seated until the end credits! Absolutely worth seeing!!!!