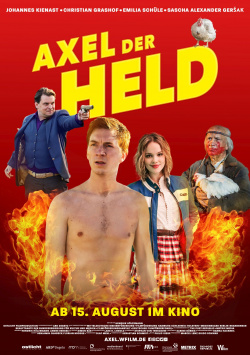 Axel (Johannes Kienast) would love to be a hero. One who would have his dream girl Jenny (Emilia Schüle) at his feet and who the mean Manne (Sascha Alexander Gersak) would be afraid of. But unfortunately he only succeeds in his dreams. In fact, Axel is more of a rabbit's foot who has to slave for Manne and who is ignored by Jenny. In the Karl May fan Heiner (Christian Grashof) Axel finds a (blood) brother in spirit. Through him Axel gets the courage to break out of his comfort zone and let his daydreams become reality. But is Axel really ready to be a real hero?

I am always happy when I get to see German films that are a bit different, just unusual and non-conformist. Such films get a plus point from me right away. Axel, the Hero is without a doubt one of them. The whimsical mixture of fairy tale, western, romance, comedy and socio-critical drama is full of original ideas and a playful visual language. That director Hendrik Hölzemann does not go the usual ways, on which the entertainment cinema from Germany otherwise so willingly moves, must be credited to him.

This also applies to the cast, which does not use the pool of the usual suspects - apart from Emilia Schüle perhaps, but she again convincingly demonstrates her acting versatility. These are all plus points that Axel, the hero can claim for himself. Still, the film unfortunately doesn't always work the way it would like to. Characters like Karl May fan Heiner are a nice idea, but seem too artificial to be really convincing. And the humor also takes on a little too odd at times.

Axel the Hero is a charming and somehow likable film - but one that also takes a lot of getting used to. The story just isn't as much fun as one might actually hope, given the number of original ideas. In the end, however, the convincing ensemble, a few haunting moments and the pleasantly inappropriate staging at its core ensure that this unusual heroic story is still well worth seeing for lovers of German program cinema of the lighter kind, despite its weaknesses!

Cinema trailer for the movie "Axel, the Hero (Deutschland 2018)"
Loading the player ...