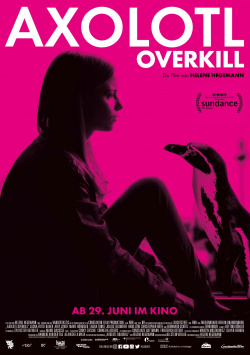 Mifti (Jasna Fritzi Bauer) is 16, but truly lives no ordinary teenage life. Since the death of her mother, she lives with her half-siblings Anika (Laura Tonke) and Edmond (Julius Feldmeier) in a Berlin shared apartment. She rarely goes to school and usually these visits end up in the principal's office. She'd much rather spend her time with mid-forties Alice (Arly Jover), with whom she's been having a wild affair for some time. Or she wanders through nocturnal Berlin with her new friend, the actress Ophelia (Mavie Hörbiger), and experiences wild nights in a drug frenzy. Mifti is wild, angry, sad, in love. What will it be like when she grows up?

With the novel Axolotl Roadkill, the then 17-year-old Helene Hegemann delivered a real sensational success in 2010. It may be debatable whether she was celebrated by the feuilleton particularly because of her age or really because of the literary quality of her book. Success cannot be denied her, despite accusations of plagiarism. Now Hegemann has made her novel into a film herself. In her own words, this has resulted in something very much her own, which is why she has slightly changed the title to Axolotl Overkill.

The result is not a stringently told story, but rather an accumulation of ideas. Acting-wise, the whole thing is utterly convincing. Jasna Fritzi Bauer does seem to be subscribed to roles like this. But as long as she plays so convincingly and strongly, it's no big deal that she's primarily hired to play characters like this. The visuals also have some truly engaging aspects to offer. Otherwise, however, Axolotl Overkill is a film that will divide opinion - as was the case with the book. While many critics are celebrating the work, there will be many who will take issue with the occasionally laboured production and the less than sympathetic characters.

As pretty as some moments are to look at, they make little sense in a dramaturgical context. Of course you can interpret a lot into it, which might make sense then. But strictly speaking, many scenes belong to the category Is that art, or can that go away. And not infrequently the conclusion will be: It can go! Axolotl Overkill is a very unwieldy, exhausting and at times frustrating film, with the director's artistic ambitions repeatedly getting in her own way. This may work well for some viewers, and especially for Helene Hegemann herself. But especially in view of the immense hymns of praise that have been sung for the book, this colourful collage of scenes is rather a disappointment. Therefore, only for such viewers who really liked the book and who appreciate challenging arthouse cinema, in which dramaturgical stringency plays a subordinate role, quite still worth seeing!