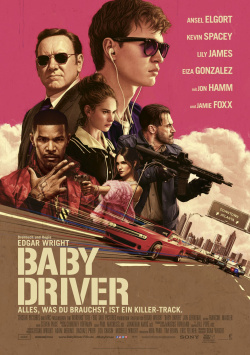 Baby (Ansel Elgort) is in debt to gangster Doc (Kevin Spacey), of all people. To pay it off, he must use his extraordinary talent to help Doc and his team pull off meticulously planned bank heists. Baby is an excellent driver who has yet to easily outrun any pursuers. Constantly accompanied by the appropriate music to cover his accident-induced tinnitus, Baby is a true artist at the wheel. Nothing can distract him, nothing gets him off track. That changes, however, when he meets waitress Debora (Lily James) and falls in love with her. For her, Baby wants to give up his illegal driving and finally live a quiet, normal life. But his feelings also make him vulnerable, and that leads him to make mistakes - and they have fatal consequences.

Those familiar with the films of Edgar Wright (Shaun of the Dead, Hot Fuzz) know two things about the filmmaker: he has a keen sense of humor and he loves movies and music. His works are not just action, horror or fantasy comedies, but always endearing tributes to other filmmakers and their work. He now seems to have perfected this distinct love of pop culture and his sense of timing, wordplay and action. For Baby Driver is nearly perfect in these respects. There is probably no film in recent memory that delivers such perfect choreography between an extremely cool soundtrack and the superbly edited action sequences. This is not only great entertainment cinema, but also an impressive display of craftsmanship.

However, Wright doesn't strike the same chord as the currently popular Fast & Furious films, but respectfully bows to much more elegant works like Bullitt with Steve McQueen. Even though this time around things are considerably more serious than in his earlier films, the fun doesn't come up short here either. Some extremely crisp dialogues and a small pinch of black humor raise the already very high entertainment value significantly. In addition, the film can benefit from the fact that the actors quite obviously had fun working on this fast-paced work. Kevin Spacey and Jon Hamm, in particular, are great.

A real surprise is Ansel Elgort, who you're more familiar with from teen movies like Fate Is a Lousy Traitor. Elgort exudes a coolness here that you really wouldn't have thought he had at first. But he blends so perfectly with his character that you never doubt for a second that he's such a perfect and daredevil driver who (almost) never loses his cool.

Baby Driver proves that action cinema can be served with elegance and brains. The film is just plain fun, offering some really spectacular sequences, a few good laughs, but also a fair amount of suspense. Even if the finale is a little too thick, there is for this work with cult potential a clear: Absolutely worth seeing!!!