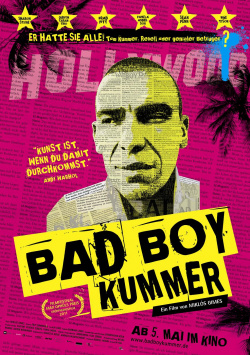 He has written the most exciting interviews. He's had them all, from Nicholas Cage to Bruce Willis to Sharon Stone to Sean Penn. His interviews were exciting, personal, intelligent, exposing. Printed in renowned newspapers like the Süddeutsche Zeitung Magazin, Tom Kummer and his interviews soon became a cult. This went on for four years until it was revealed that every word Kummer had put down on paper in recent years was merely the product of his imagination. He never exchanged a word with any of the stars. As a result, Kummer's career as a journalist was over, and two colleagues responsible for printing his interviews were also fired.

After Kummer showed no real remorse in his 2007 biography Blow up and even considered himself a victim, filmmaker Miklós Gimes became interested. He wanted to meet Kummer and find out what kind of person he was and how he judged the case. And so he visited the family man, who lives as a tennis instructor in Los Angeles, in the City of Angels and captured the result on film.

Bad Boy Kummer is a highly entertaining documentary, which is extremely exciting, especially for those viewers who are interested in journalism, but also in show business. Even though what Kummer has indulged in is a slap in the face, especially for journalists, his reasoning can be understood to some extent. Kummer was perfectly willing to do real interviews. But when it came to press junkets, he was then dictated which questions to ask and which to avoid at all costs, and the answers to the allowed questions were usually even more superficial than the questions themselves. For Kummer this had nothing to do with journalism, he found such interviews wrong and boring. And so he just preferred to think up more exciting and intellectual conversations himself - and thus hit exactly the nerve of the readers.

The documentary proves quite clearly that Kummer is not a stupid person. He just has a perception all his own, which at times seems somewhat removed from reality. But when some of his critics have their say and he is directly confronted with various accusations, the viewer realizes that Gimes does not just uncritically accept or even glorify Kummer's behavior. But he also refrains from one-sided blame. For, as is also mentioned in the course of the documentary, it is hardly comprehensible that a journalist should have conducted such interviews over a period of years and that no one, neither the editors nor the agents of these stars or press agencies, should have noticed anything. No one can be so naive as to actually believe that.

However, whether one assigns all the blame to Kummer, whether one approves of his behavior or completely rejects it, his story is exciting and interesting all the same. And the entertaining realization in this documentary makes Bad Boy Kummer an important lesson in modern entertainment journalism. Worth Seeing