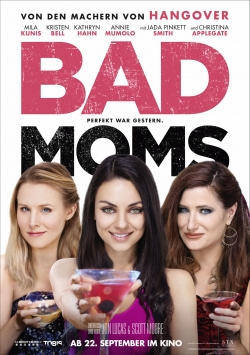 Mother of two Amy (Mila Kunis) is tired of always having to be the perfect mom. She sacrifices every second of every day for her kids, yet can't please her offspring or the overzealous helicopter moms at school. When she catches her husband cheating online, she's had enough. Now it's the end of all the rules, the prohibitions and the perfectionism she has to deal with day after day. Now it's her turn again. Together with her new friends Kiki (Kristen Bell) and Carla (Kathryn Hahn), Amy finally lets it rip again - and calls the stuffy Übermutti Gwendolyn (Christina Applegate) on the plan, who can not stand it when someone does not dance to her tune.

Bad Moms is the latest directorial effort from the successful writing duo of Jon Lucas and Scott Moore, who are best known for their work on the box office hit Hangover. Wild Moms also hits the same notch humor-wise. Many gags are very crude and even if they do not go quite as deep below the belt, as in the chaotic bachelor party in Las Vegas, just the dialogue is not for the feint-hearted. But unlike some of the other sledgehammer comedies of recent months - such as Dirty Grandpa - Bad Moms works really well for long stretches. That's because the movie just doesn't rely solely on its zaniness, but also draws likable characters and even has some clever ideas hidden in the chaos they go through.

Thus, the comedy doesn't feel like a pointless string of late-pubescent penis jokes, but has plenty of really good laughs to offer alongside some very flat ones. And even the more awkward moments are readily forgiven by the film, because it manages to cover them up with a fair amount of charm. Surely, this doesn't make the movie a masterpiece. You won't find any big surprises here and if you're looking for a cliché-free zone, you won't find anything here either. But if you just want to have fun, this is the right movie for you. Because the fight against the perfectionist Übermuttis, against all the rules and tasks, with which not only mothers (and of course many fathers), but also the children are cluttered, is above all one thing: really funny.

The cast is well chosen: Mila Kunis is utterly convincing as an overwhelmed woman caught between full-time mother and part-time employee, Kathyrn Hahn is extremely amusing as a lovable redneck mommy, and Kristen Bell is simply cute as Kiki finally crawling out of her shell. But the best casting coup the creators have managed is Christina Applegate, who is a bossy Gwendolyn you can hate with all your fervor from the first minute. Whether it stays that way until the end is not revealed here, of course. But Applegate plays the power-mad, self-absorbed buffer mommy just too well. It doesn't make you think for a second of dumbass Kelly Bundy, who she once became famous as.

Bad Moms is a different kind of chick flick for those who think Sex and the City is too good, but then Hangover is a little too crude for them. A wonderful fun, just to switch off and laugh heartily. For this there is then also a very clear: Absolutely worth seeing!