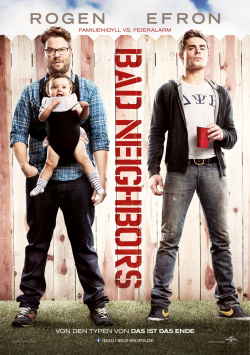 Going out, partying, just having fun among friends - all that is over for Mac (Seth Rogen) and Kelly (Rose Byrne) since their baby daughter is born. Now the young couple lives in a small, quiet suburban settlement and tries to get used to the everyday life as caring parents. It doesn't fit into the picture when a fraternity moves into the house next door. Because the members of Delta Psi want one thing above all: to throw one legendary party after another. And that would be the end of a restful night's sleep. At first, it seems as if Teddy (Zac Efron), the charismatic president of the fraternity, can be reasoned with. Mac and he even develop something like a real male friendship during a party. But when things get too loud again and Teddy doesn't respond to Mac's calls, the unnerved couple makes a fatal mistake: they call the police. And in doing so, they kick off a neighborhood dispute that increasingly threatens to degenerate into an epic battle for life in this neighborhood idyll.

With Bad Neighbors, director Nicholas Stoller (Almost Married, Never Sex With Your Ex Again) stays absolutely true to his derb-loving style. His gags aim right below the belt 90% of the time, and the script seems to consist of nothing but the word dick in some scenes. However, as with his previous films, Stoller manages very well to infuse the adolescent sex jokes and raunchy language with plenty of charm and genuinely funny ideas. The result has some nasty laugh-out-loud moments, but also a lot of really good laughs. This may not be particularly profound - apart from the surprisingly cynical and evil ending - and certainly not lasting. But as a pure fun movie, this comedy works very well overall.

The actors deliver exactly what you expect from them. Seth Rogen doesn't necessarily show great changeability in this, but he's really well cast as a newly minted father who actually feels way too young for stuffy family life. At his side, Rose Byrne gets to show off her comedic side once again, as she did in Stoller's Male Trip. And Zac Efron is convincing as a beau not exactly endowed with the greatest intellect, who is downright obsessed with throwing the most legendary party ever. Rogen and Efron in particular have great chemistry, which begins with a very nice Batman sequence and culminates in a glorious final scene. Whether Mac and Teddy get along well or fight each other to the death, it's just fun to watch these two very dissimilar actors.

Bad Neighbors serves up its slash-and-burn humor very directly, but every now and then hides a few very well-done gags in the rough-and-tumble goings-on that, on reflection, are surprisingly profound. But often the intellect is not claimed here. To laugh about exploding airbags, spontaneous erections or wild dance duels, you really don't have to strain your little grey cells. If you can laugh at crude clamour in the style of Project X, Hangover or Men's Trip, you'll get your money's worth here. The fact that the film does not have what it takes to be a student film classic a la Animal House, weighs with the very high fun factor not really negative. Therefore: for friends of solid US comedy fare well worth seeing!