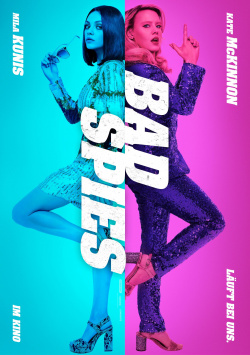 Audrey (Mila Kunis) is pissed off at her ex Drew (Justin Theroux), who suddenly breaks up with her and then doesn't even have the decency to reply to her messages. But then she learns that the man, who was more of a bore in her eyes, was actually a spy. Now Drew has been killed in action and the last thing he left behind was a USB drive that Audrey and her messy friend Morgan (Kate McKinnon), of all people, are supposed to deliver to Drew's contact in Europe. Suddenly, the CIA, assassins, and mysterious agents are hot on their heels, and the two friends are stumbling from one bloody clanger to the next.

Bad Spies could have actually been very funny. In places, the film is. But unfortunately, Susanna Fogel's production often lacks not only the right timing (gags just don't work any better when they are loudly explained by the protagonists), but also a suitable balance between action and humor. Yes, there are a few good laughs and some well staged, surprisingly crude action interludes. But even though the pacing is pushed again and again, boredom simply sets in very often. That's because the script just isn't very good, and the two lead actresses don't deliver much that's convincing either.

Both Mila Kunis and Kate McKinnon move strictly within their comfort zones without adding anything surprising to their acting for even a moment. With McKinnon in particular, there's a sense that she really can't play anything other than somewhat loopy characters, while Mila Kunis, after all, has already shown that she's got more going for her than playing Bad Moms or Bad Spies.

There are, of course, some parallels to the 2015 comedy Spy: Susan Cooper Undercover with Melissa McCarthy, though that one had a much higher gag density and lived off the delightfully self-deprecating performances of Jude Law and especially Jason Statham. Bad Spies just lacks anything like that. The gags are too weak to really blow your mind and the action isn't gripping enough to make up for that shortcoming. And the screaming of the two spies against their will gets on your nerves after a while. Not a total failure, but a weak comedy with too few highlights. Conditionally worth seeing