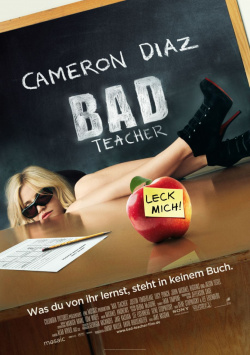 Hard-hitting teachers or extremely cool educators have been many in cinema. Whether it was Michelle Pfeiffer in Dangerous Minds, Robin Williams in Dead Poets Society or Morgan Freeman in The Badass Principal, these movie teachers always made sure their students learned not only the prescribed material but also important life lessons. But now, in Bad Teacher, Cameron Diaz brings a teacher to our cinemas that makes even Jack Black in School of Rock look like a conservative professor.

Actually, Elizabeth Halsey (Diaz) was going to hang up her teaching job after just one year and be pampered by her ultra-rich fiancé. But when he comes to his senses and realizes that Elizabeth only wanted to marry him for his money, he unceremoniously throws the young teacher out the door and turns off the money tap. Now Elizabeth will have to go back behind the teacher's desk in the next school year. But only until she has scraped together enough money to have her breasts enlarged. Because then the rich admirers will surely come all by themselves. One promising candidate is the new substitute teacher (Justin Timberlake), but Elizabeth's colleague Amy (Lucy Punch) also has her eye on him. Soon a merciless competition develops between the women, which makes Elizabeth see her job with completely different eyes.

Bad Teacher mixes crude slapstick with clever wordplay, presents shameless slapstick and charming comedy, carried by endearingly overdrawn characters. Director Jake Kasdan (Walk Hard - The Dewey Cox Story) aims at the bottom of the belt a few times. But his comedy rarely seems really flat. This may be due to the fact that you can tell that the actors all had a lot of fun during the shooting. While Lucy Punch (I See the Man of Your Dreams) acts a bit over the top, Jason Segel (How I Met Your Mother) and Justin Timberlake in particular provide some very good laughs. Timberlake's little musical interlude is bursting with self-mockery and is just wonderful in its very own, extremely awkward way.

But the film is freely carried by Cameron Diaz, who manages to lift this crude comedy very well. Especially in the moments when Elizabeth displays her chavvy no-bullshit mentality, Diaz is on top form. But her attempts to manipulate men for her own ends also provide top-notch comedy. The chemistry between Diaz and Segel is particularly good, but unfortunately the two have too few scenes together in the end. But the charming ending compensates for this small weakness.

Anyway, the entire film has a fair amount of charm despite some fecal and sex jokes. This may also be due to the fact that director Jake Kasdan has once again surrounded himself with many friends. Kasdan, who celebrated his first successes behind the camera of the two much too early cancelled series Freaks & Geeks and Undeclared, has, for example, their co-creator Paul Feig for a mini guest appearance in front of the camera. And Dave Allen, who plays one of Elizabeth's colleagues, and Jason Segel have also appeared on camera in those series. This has created a very friendly atmosphere on set that you can just feel as a viewer.

Bad Teacher is certainly no masterpiece. But the comedy offers enough diverting entertainment and numerous really good laughs with all its obscenities, so that lovers of somewhat cruder US comedy will be only too happy to sit in on this teacher. School can be fun after all!