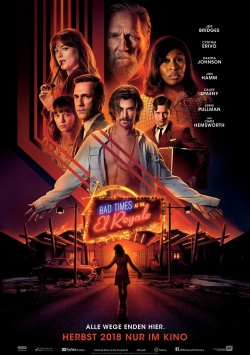 Bad Times at the El Royale

The Hotel El Royale is a real curiosity, but the state border between California and Nevada runs directly through the hotel. Many stars and starlets have come and gone here, and political celebrities have also been fond guests. But after the hotel lost its gambling license, the guests stayed away. And so Representative Laramie Seymour Sullivan (Jon Hamm), singer Darlene Sweet (Cynthia Erivo), clergyman Father Daniel Flynn (Jeff Bridges) and the mysterious Emily Summerspring (Dakota Johnson) are the only guests on a day in 1960 - a day at the end of which many dark secrets will be revealed and more blood will flow.

With Bad Times at the El Royale, writer-director Drew Goddard (Cabin in the Woods) tries his hand at a convoluted thriller in the best Tarantino style. In many moments the plan works out very well, thanks to the atmospheric location, the good actors and the twisty story. It's quickly clear that each of the characters has a secret and that the night this little bunch of obscure characters will spend together in the hotel won't end well for everyone. But despite a certain predictability, Goddard also manages to throw in some really well-done surprises here and there.

Even the first act of this film, which is divided into several chapters, is a lot of fun - especially because of the wonderful acting of Jon Hamm, who obviously had a lot of fun embodying an extremely sleazy character. But as I said, nothing here is what it seems at first glance. After the individual characters have been introduced and have moved into their rooms, the first secrets come out right away - although you should also be prepared for quite a few twists and turns.

With the secrets, however, one of the film's weaknesses also reveals itself. The dialogue just isn't strong enough to carry the action for nearly two and a half hours. There is one very long sequence that is visually very artfully done, but still drags on too much from a dramaturgical point of view. The film has to struggle with this problem more and more often, especially in the second half, which also results in the audience becoming more aware of some inconsistencies that were previously hidden by the coherent mix of wonderful dialogue, gripping plot and great actors.

This then prevents Bad Times at the El Royale from becoming the quite big hit that the beginning actually promises. Despite some lengths, Drew Goddard has nevertheless succeeded in a very entertaining whodunit, which may not quite reach its obvious role models, but can still convince stylistically and acting all along the line. For this there is - with small deductions - a clear: Worth seeing!

Cinema trailer for the movie "Bad Times at the El Royale (USA 2018)"
Loading the player ...