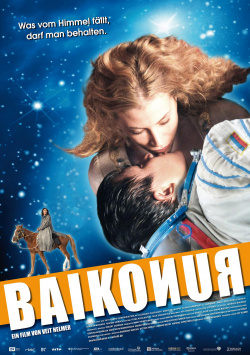 The inhabitants of a small village in the middle of the Kazakh steppe near the Baikonur space station live off what falls from the sky with nice regularity. This is because the space junk can easily be turned into money or traded for other goods. Young Iskander (Alexander Asochakov), called Gagarin, who spends most of his time with his radio, dreams of one day being allowed to fly into space himself from Baikonur. When he sees French space tourist Julie Mahé (Marie de Villepin) begin her journey into space on television, the young man can hardly resist her fascination. When Julie crashes her space capsule over the desert, it is Iskander, of all people, who finds her. And true to the motto What falls from the sky, you get to keep, Iskander doesn't think of giving his beautiful find back either. He tells Julie, who can't remember anything after the crash, that she is his fiancée. However, not everyone is happy about this young love. Especially Nazira (Sitora Farmobova), who has been secretly in love with Iskander for a long time, is not happy about her new neighbor. When Julie is found by the search party from Baikonur and the romantic lie threatens to be exposed, events take a surprising turn.

With Baikonur, director Veit Helmer (Absurdistan) remains true to his very sustained narrative style. Without many words, he tells a fairytale love story that lives primarily from the mesmerizingly beautiful images Helmer and his team captured on original locations. What makes this film so special is that Helmer was the first feature film director ever to be allowed to shoot in Baikonur. The city of Soviet-Russian spaceflight has an undeniable fascination, and the stark contrast between the hustle and bustle of Baikonur, dominated by modern space technology, and the simple life of the Kazakh steppes lends a certain charm to the proceedings.

The story itself is endearing and pleases with its understated, pleasantly whimsical humor. The cast are all believable and authentic, with the two leading ladies standing out a little due to their not-so-common beauty. What Baikonur struggles with, despite its engaging imagery and inherently nice story, is its somewhat unwieldy staging. The extremely slow storytelling and the sometimes somewhat forced characters make for cultivated boredom, especially in the first third of the film.

Sure, Baikonur is a nice film and the visuals alone are a testament to Helmer's craftsmanship. But pretty pictures just aren't enough on their own to justify a visit to the cinema. Therefore: the pictures belong in the cinema, the story only in television. Even for arthouse lovers Baikonur is therefore only conditionally recommendable!

Cinema trailer for the movie "Baikonur (Deutschland/Russland/Kasachstan 2010)"
Loading the player ...