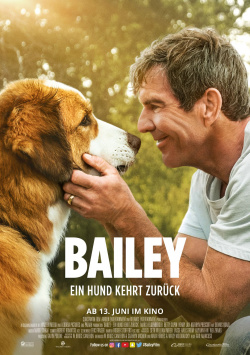 It had taken many long years and several dog's lives for Bailey to find his master Ethan (Dennis Quaid) again. Now he is happy and content with Ethan and his wife Hannah (Marg Helgenberger) on their farm. Little CJ, Ethan's granddaughter, also lives here. But her mother (Betty Gilpin) doesn't like to see how close her daughter is to her grandparents. One day she grabs the girl and moves to the big city. When Bailey dies shortly after, Ethan asks him to take care of CJ in his next life. And so begins the dog's search for the girl in his next incarnations, finding her years later as a young woman (Kathryn Prescott) in New York. And Bailey soon realizes that CJ really does need all his canine love to cope with life's difficulties.

Two years ago, Lasse Hallström's film adaptation of W. Bruce Cameron's animal bestseller Bailey - A Friend for Life created a real box-office hit, grossing nearly ten times its budget at $200 million. So it's no wonder that the story is now being retold with Bailey - A Dog Returns. The renowned TV director Gail Mancuso has taken over the helm, but otherwise (almost) everything has remained the same: Once again, the viewer accompanies Bailey through various dog's lives, which lead him to a certain destination in the end. However, one thing is different: While in the first part only the first and the last dog has been together with Ethan, the path of each dog in the second part crosses the path of CJ.

This is just for dog lovers again very nice to watch and sometimes really touching. However, this time the story seems even more contrived and loaded with clichés than was the case with the already not exactly original first part. CJ's mom, for example, is a completely overdrawn bad mother, who drowns her frustration about her failed career in alcohol and who would rather hang on to some guys than take care of her little daughter. How the whole thing ends is as clear as the amen in the church from the beginning. That goes for the entire story, by the way, which doesn't have a single surprise in store.

In other respects, too, the film just feels like a light version of its predecessor. The make-up of Dennis Quaid and Marg Helgenberger at the end of the film is not very convincing and also the we-are-old-and-fragile-play of the two seems a bit amateurish. Even the many cute dogs can't hide that. All in all, Bailey - A Dog Returns is not really a bad movie, but it can never reach the emotional impact of its predecessor. And that's why it only gets a: Worth seeing!