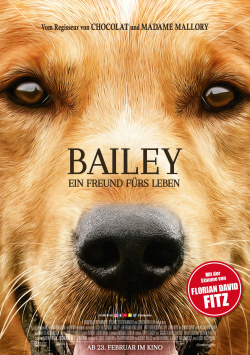 Bailey - A Friend for Life

Little Ethan loves his golden retriever Bailey - and Bailey loves his young master. Over the years, the two are inseparable. Even when Ethan has to end his football career after an accident, before it has really begun and he loses the love of his life, his dog is always by his side. But eventually their time together is over. That doesn't mean Bailey forgets about his soul mate, though. No matter what reincarnation he returns in over the next few decades, and no matter how much he loves his other masters and mistresses, his very special bond with Ethan is unique. I wonder if they'll ever see each other again.

With Bailey - A Friend for Life, director Lasse Hallström presents his second dog film after Hachiko, which is about the very special bond between dog and master. While Hachiko, based on a true story, was about loyalty until death, the film adaptation of W. Bruce Cameron's bestseller I Belong to You even goes a step further and shows that this unique bond remains even after death and moves with the soul into the next reincarnations. This sounds a bit thick and esoteric, but it works surprisingly well. Also, don't be put off by the fact that the story is told entirely from the dog's point of view. Because that, too, is delightfully charming in its execution.

The reason the film works is that you can tell that someone who loves dogs was at work here. Their behavior is extremely well observed, often commented on with a wink or presented in a very emotional, but not too cheesy, way. This leads to the fact that you as a viewer can laugh heartily here, but now and then also a tear must stifle - at least if you have or had dogs yourself. Then one recognizes also so many small everyday life situations again, which is simply completely bezaubernd and affectionately converted.

In this context, the controversy with which this film was confronted shortly before its premiere should not go unmentioned. The makers were accused of animal cruelty in one scene in particular. Even if this statement was relativized in the meantime by experts and animal rights activists, an uneasy feeling remains with said scene. Nevertheless, it would be wrong to boycott the whole film because of this. Because it becomes clear in so many scenes that great dog lovers were at work here, that their work should be appreciated.

Bailey - A Friend for Life is a truly beautiful, amusing and touching dog movie. Well, the whole thing is far-fetched and thick, but the whole thing is so charmingly told that you just can not escape it. Therefore: A must-see for everyone who loves dogs. If you already liked Hachiko, you shouldn't miss this animalistic "Look who's talking" version. Absolutely worth seeing